The most electable Republican in America is … um … Ron Paul?

That’s what you might think if you looked at today’s Rasmussen poll, which shows Obama leading the libertarian by just 1 point, 42-41. The ‘shock poll’ is getting its share of attention, particularly since few other polls have shown any Republicans running that competitively against Obama.

But as regular readers of this website will know, the person conducting the poll can have a profound impact on its results. Rasmussen, in particular, has had a substantial Republican-leaning house effect thus far this year. Perhaps they will turn out to be right (although their idea of trying to apply a “likely voter” model 2.5 years in advance of an election is dubious). But it would be wrong to take a Rasmussen poll (or any other) at face value without taking into account this context.

Instead, I’ve compiled all polls conducted since July of last year(**) that test Obama against a Republican opponent. For this exercise, I use the Real Clear Politics rule of only using one poll from each firm for each matchup (the most recent). I then adjust the polls for house effects using a simplified variation of our standard method; both Presidential approval polls and the numbers from these 2012 matchups are used to calibrate the house effect. The results for each matchup that have been surveyed by at least two different pollsters are compiled below: 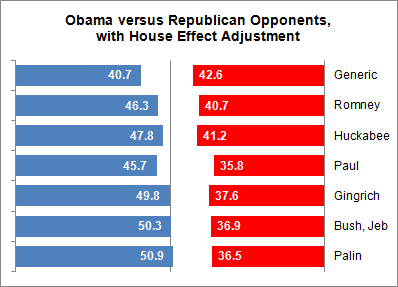 After adjustment for house effects, Obama’s lead over Paul is not 1 point but more like 10. This result is closer to that obtained by a PPP poll in November, which had Obama ahead 46-38 against Paul (PPP’s 2012 polls have also had a very slight Republican-leaning house effect.)

Paul’s 9.9-point deficit is not awful — it’s better than of Newt Gingrich (-12.2), Jeb Bush (-13.4) or Sarah Palin (-14.4) do — but lags behind the performance of Mitt Romney, who is just 5.6 points behind, or Mike Huckabee, who is down 6.6. It also lags behind the performance of a so-called generic Republican, who is actually slightly ahead of Obama. However, it is a problem for Republicans that no actual Republican can approach the performance of the generic candidate, probably because the generic candidate is Rorschach blot that allows each respondent to create what amounts to their fantasy candidate.

Paul does hold Obama to his lowest share of the vote — 45.7 percent — among the six actual candidates, although his share in the adjusted average (35.8) is also the lowest. This is very likely a reflection of his comparatively low name recognition.

(**) Although I do go back to last July to compile these figures, the only polls we use that are older than January are from Rasmussen (their Romney and Palin matchups) and PPP (their Gingirch and Paul matchups). Both these pollsters have shown very flat trends in Presidential approval since the time those particular polls were conducted, so the comparison should be reasonably kosher. Moreover, the differences if they were excluded would be trivial.