The conventional wisdom holds that South Carolina is likely to be the toughest test yet for Mitt Romney’s campaign. But I’m not so sure that’s true. From my vantage point, Mr. Romney’s position there looks fairly robust.

Let’s start by looking at what our polling-based forecasts of South Carolina said prior to the New Hampshire primary: 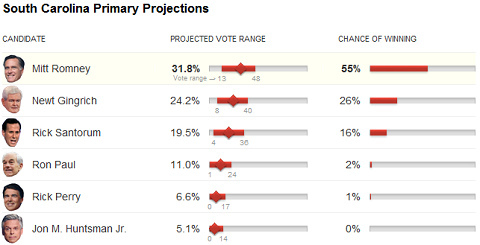 The forecasts had Mr. Romney with 32 percent of the vote in South Carolina, Newt Gingrich with 24 percent and Rick Santorum with 20 percent. That didn’t appear to be all that safe a lead for Mr. Romney, and the model gave him only a 55 percent chance of winning.

However, these results will probably be affected by what happened in New Hampshire.

The best empirical way to estimate the “bounce” a candidate will get out of a state is to look at how he performed relative to his polls.

Mr. Romney got 39 percent of the vote in New Hampshire, which almost exactly matched his polling-based forecasts. So he is unlikely to get much of a bounce for having exceeded expectations.

But bounces aren’t entirely relative; absolute performance can matter, too, especially if candidates get favorable news coverage from their performance. Mr. Romney did get that favorable coverage Tuesday night. (This was well deserved in my view: he had a clear victory in New Hampshire, which was called by the news organizations almost as soon as the polls closed.)

So the worst-case scenario for Mr. Romney is probably that his numbers hold steady in South Carolina. More likely, he will get a modest bounce, and there is some chance he will get a fairly big bounce.

Ron Paul, who did beat his polling average (although only by a few percentage points) may also get a favorable bounce. But he was at 11 percent in the polls in South Carolina, so it isn’t likely to put him all that close to the front-runners.

Mr. Gingrich and Mr. Santorum were closer to Mr. Romney in South Carolina, but neither performed well in New Hampshire — it looks, in fact, as though both might finish in the single digits. If their numbers move, it is liable to be downward. The same holds for Rick Perry, who got less than 1 percent of the vote in New Hampshire.

Jon M. Huntsman Jr. had a better performance in New Hampshire. But he had made a point of raising rather than hedging expectations, and got relatively skeptical news coverage on Tuesday night. Maybe when the dust settles, the performance may look a little stronger, but since Mr. Huntsman was at only 5 percent in recent South Carolina polls, it may not matter much.

I ran an experiment in which I inserted a hypothetical South Carolina poll into our model in which Mr. Romney and Mr. Paul gained a couple of points from their previous polling average, while Mr. Gingrich, Mr. Santorum and Mr. Perry lost a point or two, and Mr. Huntsman held steady. Then I reran the numbers. The model gave Mr. Romney a much clearer chance of winning: 87 percent.

To reiterate, these are hypothetical numbers. But they’re consistent with what I’d expect to see if the New Hampshire bounce is typical, given what we know about how these things have behaved in the past.

We know that Mr. Romney is likely to be attacked during this period. We know this because a “super PAC” that supports Mr. Gingrich has already committed several million dollars to commercials that critique Mr. Romney. In South Carolina, where television time is fairly cheap, voters are going to be seeing those commercials a lot.

I don’t consider it a given that the substance of the commercials is likely to resonate with Republican voters. The ads, which focus on Mr. Romney’s time at Bain Capital, essentially attack him from the left, portraying Bain Capital as a job-destroyer.

But suppose that the attacks do work. Or suppose that a different line of attack against Mr. Romney proves to be effective. Newt Gingrich, for instance, has a separate commercial that attacks Mr. Romney’s positions on abortion. That’s the sort of thing you would typically expect to see in a Republican primary in South Carolina.

The problem is that there may be no Republican candidate poised to benefit from a downtrend in Mr. Romney’s favorability numbers.

Mr. Gingrich is in the strongest position in the South Carolina polls after Mr. Romney. But even when negative campaigning is effective, it can sometimes hurt the candidate who makes the attack as well as its target, and it has now been well publicized that this organization is running the ads on behalf of Mr. Gingrich.

Mr. Huntsman and Mr. Paul are not good fits for South Carolina. Mr. Perry is a better one, but he is polling in the single digits there.

Mr. Santorum is the closest thing to an exception, and he may be the candidate most likely to win South Carolina if Mr. Romney does not. Mr. Santorum has a hard-working campaign team, but one with relatively little money that still needs to scale up to a national level after its success last week in Iowa.

And Mr. Santorum starts in a deficit to Mr. Romney in the South Carolina polls — one that could very well increase some once the results of New Hampshire are reflected in the polls.

If this is the most likely scenario for Mr. Romney losing South Carolina, then you have to like Mr. Romney’s chances quite a lot. And even if Mr. Romney loses South Carolina, he’ll have won two of the first three states, and his campaign has some advantages in the next stop on the primary calendar, Florida, where you generally need a lot of money to compete because of the state’s large population and expensive media markets.

I’m not quite ready to say that Mr. Romney has the nomination locked up, but when you evaluate the known unknowns, they don’t seem that threatening to him.

We may be nearing the point where an unknown unknown — a heretofore unexposed scandal, a major gaffe, an “oops” moment in a debate — is what it would take to trip Mr. Romney up.