You might sometimes have seen me use the term “majority track” to refer to the Republican delegate math. The meaning is pretty simple: is a candidate winning a majority of the delegates that are up for grabs in a given contest?

That is, after all, the easiest way to win the nomination: take the the majority of delegates. The slightly harder way is to win a plurality and be pushed over the top by the party’s delegate rules, since super delegates and other unbound delegates have some flexibility for who they vote for at the convention. If Mr. Romney wins 48 percent of the elected delegates, for instance, and his next-closest competitor wins 30 percent instead, he’ll almost certainly win the nomination.

Still, it’s worth seeing how Mr. Romney is performing against the majority benchmark. What I’ve done in each state is as follows: taken the number of delegates at stake and divided them in half, rounding up in the case that this resulted in a fraction. In South Carolina, for instance, there were 25 delegates at stake in the state’s primary. Divide that by half and round upward, and you get 13 — that’s the majority track. 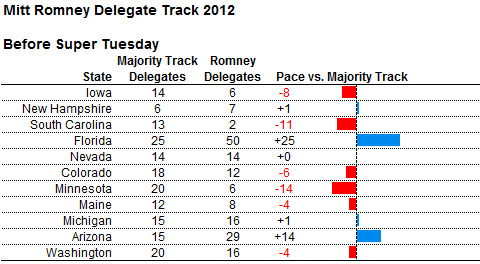 (A methodological note: I am projecting caucus delegates out in states like Iowa and Maine on the assumption they are proportional to the straw-poll vote there, a dubious assumption in practice. However, until those states hold their regional and statewide conventions, there isn’t really any better way to estimate how the delegate totals might end up. I do not, however, include things like super delegates in the majority track — only those that are at stake based on the voting outcome in each state.) 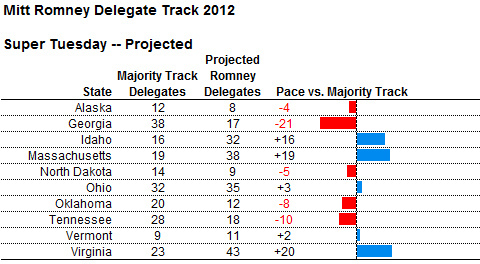 So should this count as progress toward the Republican nomination — or more like treading water? Since none of Mr. Romney’s opponents are even close to the majority track and are unlikely to get closer to it on Tuesday, it would appear to be progress. Instead of just holding steady in future states, they’ll have to make up a large amount of ground in future states, some of it on highly unfavorable terrain.

I do think it goes too far, however, to imply that Mr. Romney is close to clinching the nomination in a literal or mathematical (rather than figurative or practical) sense. By comparison, look at what John McCain did on Super Tuesday in 2008: 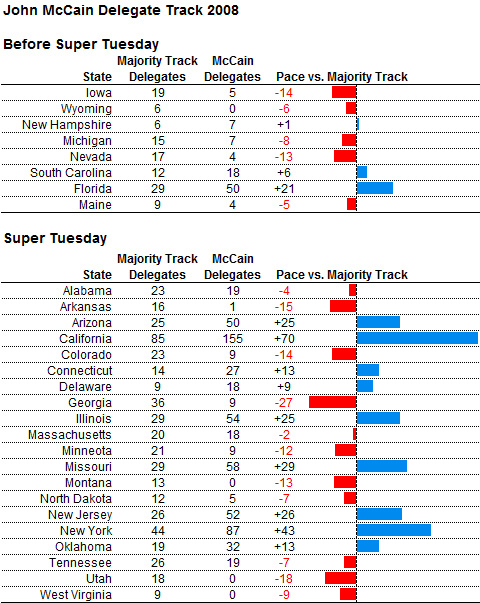 That year, Mr. McCain ran very far ahead of the majority track, gaining 125 delegates on it overall, because of his performance in large states like California, Illinois, New York and New Jersey that used winner-take-all or winner-take-most rules. That kind of outcome is just not possible for Mr. Romney on Tuesday, with fewer and less-populous states voting than in 2008 and many using relatively proportionate delegate allocation rules.