In a tragic piece of NFL news somewhat overshadowed by a full slate of games Sunday, former Tennessee Titans placekicker Rob Bironas was killed in a single-vehicle accident late Saturday after losing control of his SUV.

A nine-year veteran of the league, Bironas wasn’t on an NFL roster at the time of his passing, but he had recently tried out with the Tampa Bay Buccaneers and Detroit Lions. He was released by the Titans in March after nine seasons with the club, and, after his death, there was an outpouring of emotions from his former Tennessee teammates.

“Rob was a real charismatic guy that always kind of brought smiles to people’s faces around the building, around this team,” Titans quarterback Jake Locker told reporters Sunday.

But Bironas wasn’t just a good locker room guy. He was arguably the best kicker of his era.

As the Titans’ starter from 2005 to 2013, Bironas posted the league’s ninth-best field goal percentage, but that number sells short his accuracy. Raw field-goal percentage treats every kick equally, regardless of distance, so kickers who have a disproportionate number of long attempts are unfairly penalized. Only Sebastian Janikowski of the Oakland Raiders tried more kicks of 40 or more yards from 2005 to 2013. And Bironas made these at a rate 4.8 percentage points better than the NFL average — the fourth-best percentage for any kicker with 50 or more attempts from those distances.

If we compare Bironas’s extra-point accuracy and his field goal percentages in each “bucket” of distances (0-19 yards, 20-29 yards, etc.) to the league average, we can estimate the number of points he generated above that which an average NFL kicker would have produced with the same opportunities. Over his career, Bironas was above average — often significantly so — in every bucket except 20-29 yards. On longer kicks, where there is a greater variation between kickers’ performances, Bironas excelled, leading the NFL in points above average from 50 or more yards. He also ranked third on kicks of 30-39 yards and seventh on kicks of 30-49 yards, the range that makes up the majority of most kickers’ field goal attempts. All told, Bironas added roughly 31 points more than an average kicker for his career, a number that ranks second only to longtime Detroit Lions kicker Jason Hanson’s +31.6 mark over the 2005-13 span.

He also attempted 58 more field goals and 62 more extra points than Hanson, who retired before the 2013 season. If we make our baseline closer to the replacement level, rather than average, we need to give Bironas credit for the extra kicks he attempted. That’s essentially the process behind Pro-Football-Reference.com’s kicker Approximate Value (AV), which uses the scale of salaries paid to NFL kickers to determine how much value there is in spending an entire season as a league-average kicker. (The distinction between the two systems being that an average kicker would create zero points above average but still is paid more — albeit slightly — than the league minimum, which implies nonzero value in being average.) And when we take into account the extra attempts, Bironas comes out as the most valuable kicker of the 2005-13 period.

(Note: Points above average for field goals of 0-19 yards aren’t listed because every NFL kicker made 100 percent of their kicks within that range from 2005 to 2013.) 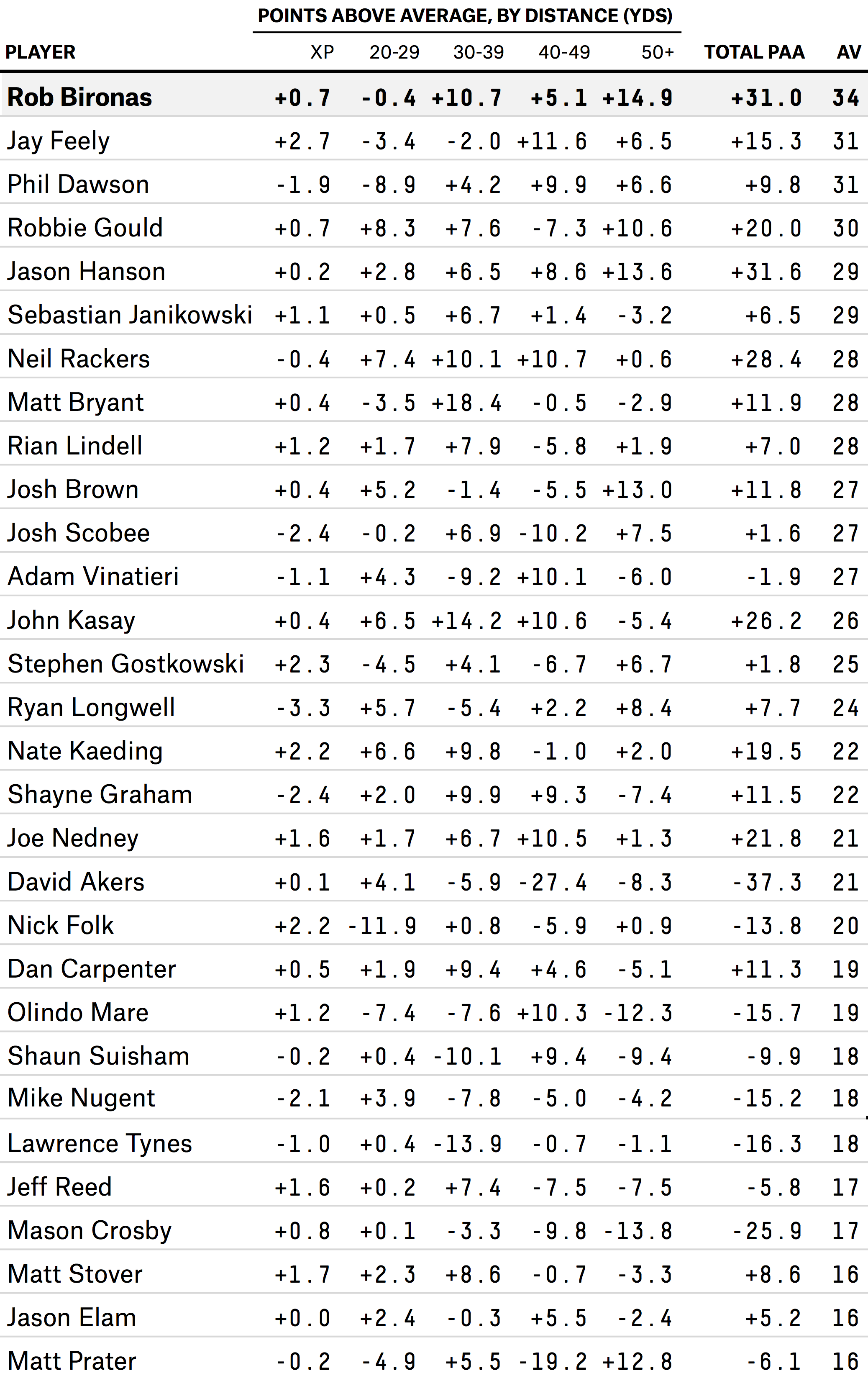 (Of course, this ignores kickoff distance, where Bironas was better than the norm but merely the NFL’s 12th-best over the 2005-13 span in terms of yards above average. If we assume 12 yards equals one point, Bironas added 36.5 points above average with his kickoffs; meanwhile, league leader Pat McAfee of the Indianapolis Colts added an eye-popping 111.1 points above average — although it’s unknown how much McAfee’s kickoff average was aided by teeing it up indoors for all of his home games.)

Bironas’s career can’t, and shouldn’t, be distilled down to numerical traces. He gave the Titans nearly a decade of stability at a traditionally volatile position and was helping to do good in the Nashville community. But if we have to assess Bironas the player in terms of his ability to put points on the board, he also may have been the best in the business during his career.