Why did Barack Obama appear on Fox News Sunday this morning? For the same reason that Hillary Clinton (see video below) is campaigning on a proposal originally introduced by John McCain: a summer holiday from the federal gas tax.

The reason is that the remaining primary calendar veers decidedly right of center. Below is a graph of the 50 states, sorted by the percentage of the vote that George W. Bush received in 2004. The states that have yet to vote are highlighted in red. 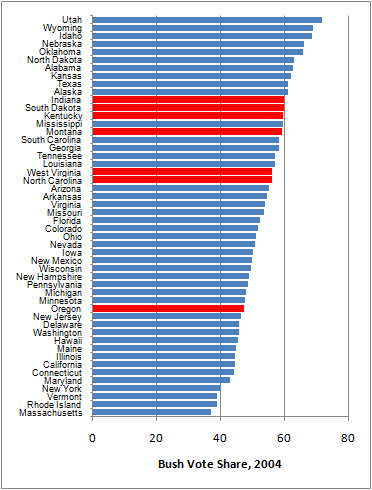 With the exception of Oregon, which is more conservative than is generally acknowledged, the other six states all fall within a relatively narrow band toward the right-center of the political spectrum. And four of those six states (Kentucky and South Dakota are the exceptions) have open primaries.

So have the Democrats begun to pander to the right? It depends on your definition of pander, I suppose. But on balance, it is probably helpful to them to have these right-center states on the docket as we transition gradually into the general election cycle.

It does seem to me, however, that their respective actions are illustrative of the different approaches they might take toward courting the political center in a general election campaign. Obama will have a conversation with a right-of-center news outlet, which asks a series of questions framed from a right-of-center point of view, but will not actually espouse any particularly right-of-center policy proposals. Clinton, on the other hand, will take on a position that taken criticism from both the left-wing and the right-wing establishments, but which probably plays relatively well on the stump.