SPARSELY POPULATED, SPACIOUS Wyoming is another on our not-much-fall-drama electoral list. Republicans dominate nearly every elective office here with the exception of highly popular two-term governor Dave Freudenthal (who won re-election by 40 points in 2006). Nearly three-quarters of the state legislature are Republicans. Both Senators and the lone House member are Republicans, and Wyoming hasn’t been represented by a Democrat in the United States House or Senate since 1978. Since Truman, the only time that Wyoming chose a Democrat for President was 1964, LBJ’s landslide year. While Democrat Gary Trauner came within 1,000 votes of unseating Representative Barbara Cubin during the 2006 Democratic wave election, it’s worth noting that while seemingly safe Republicans fell in other districts, they held on in Wyoming. The head start Republicans enjoy is formidable for any Democrat trying to win here. 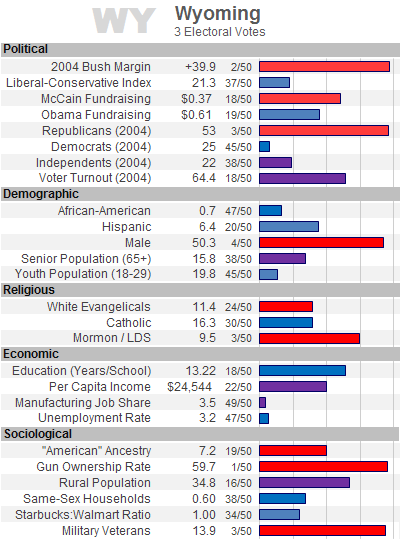 Highest rate of gun ownership at a staggering 60%. 2d highest Bush 2004 margin. 3d highest percentage of military veterans. Low unemployment and a fairly strong statewide economy. Very male, very few black voters, not many young people… want us to go on? OK, how does a 53-25 partisan ID edge for Republicans sound? The bottom line is that while libertarians are not at all excited about the previous eight authoritarian years under Republican rule (though Wyoming graciously bestowed Dick Cheney upon us), there are just so many built-in demographic advantages that Wyoming isn’t in danger of going blue at the presidential level anytime soon. Other states with bigger liberal areas such as Missoula, Montana would flip first. John McCain’s “maverick” brand plays well in a place like Wyoming, and he should coast to an effortless win.

Demographically, not much. He still beats McCain in per capita fundraising (both do above average in that department here) and Wyoming is slightly more educated in terms of number of schooling years per voter than the average state, but that’s about as good as it gets for Barack Obama in the demographics. One positive sign for at least base enthusiasm is that Obama solidly beat Hillary Clinton in the Democratic primary here, and not simply because Wyoming held a caucus rather than a primary. Republicans successfully turned the Clintons into the poster children of gun control during the 90s, and the NRA plans on turning Obama into the 2d Amendment boogeyman during the general election. In a state where nearly everyone owns a gun, being seen as a gun control candidate is like being painted an atheist in South Carolina. This is not a partisan issue but a cultural one. Moreover, Obama’s compromise on FISA probably didn’t wear well with Wyoming Democrats.

Since the presidential race and both Senate seats are safe Republican again in Wyoming this year, about the only drama will be at the House level. With Barbara Cubin’s retirement from the House, will the now-better-known Trauner close the deal against Wyoming Treasurer Cynthia Lummis and send a Wyoming Democrat to Washington for the first time in three decades? If 2008 is another national Democratic wave year downballot, it’ll be worth watching to see whether Obama’s presence on the ticket helps or hurts Trauner against the spread. Bush and home stater Cheney beat their Democratic opponents here by 40 points each of the last two races; based on sparse polling data Obama appears poised to hold McCain to a 20-point-or-less win. If Obama winds up winning but loses by a wider margin than we expect, it’ll signal that an Obama administration has many more inroads to make with libertarians.