Today we continue our Road to 270 series with the Badger State, Wisconsin.

HOMELAND OF EXTRAORDINARY PHOTOGRAPHER/ADVENTURER BRETT FAVRE MARTY, Wisconsin a significant manufacturing state that votes at very high rates. In 2004, it was the closest contest, shading to John Kerry by the slimmest of margins (0.4%). In 2000, Gore won the state by less than a percent. With those tiny wins, Republicans had good reason for optimism, given that since Nixon resigned only Ronald Reagan (twice) earned Wisconsin’s electoral votes on the Republican side. The state seemed to be closing. However, in 2008, Barack Obama put Wisconsin away early, despite the Republican National Convention aimed at moving the upper Midwest into the red column on November 4. And look, we didn’t even make a cheese reference. 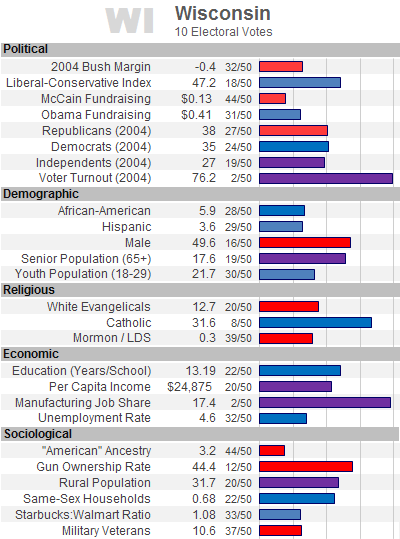 Wisconsin has a high gun ownership rate, a fairly high share of male voters, not many minority voters, and a decent number of white evangelical voters, including in Platteville, where jaded, disaffected youth grow up to one day take photos of campaign offices. There are plenty of hockey moms in Wisconsin, but not enough to tip the scales in the McCain-Palin direction. Wisconsin isn’t ideologically shaded against McCain, as it sits fairly close to dead center on the Likert scale, and indeed self-identifying Republicans outnumbered Democrats four years ago. Wisconsin doesn’t have a particularly high percentage of youth voters that would tend to help McCain, but in the end McCain’s anemic fundraising here foreshadows the lack of traction his campaign has gotten in the state.

Wisconsin’s huge primary night win for Barack Obama cemented a momentum swing in his favor that locked down the delegate race. With a large number of Catholic voters, moderate social views, and a lower proportion of military vets, Wisconsin shades in some ways toward a Democratic candidate, but it is similar to Missouri in that many of its data points cluster around the median. Obama simply is popular here. As a Midwestern Senator, Obama began with higher name recognition in Illinois’ neighboring state, and his tone and style is pitched very well to a Midwestern audience, as much as any audience. Barack Obama will win the state’s ten electoral votes.

In the House, Republicans hold the three suburban/exurban seats in the southeast surrounding Milwaukee, and Democrats hold urban Milwaukee and the remainder of the state’s four seats. The least safe race is Democratic incumbent Steve Kagen’s race in the 8th district, in the northeast quadrant that includes Green Bay, but it leans Democratic. There are no Senate or gubernatorial races, so the presidential race is where it’s at, but we project Obama to win by double digits. This is one of those states that cut strongly against the purported Bradley Effect in the primaries, where Barack Obama swept to a sizeable victory that outstripped the polling. Though Republicans made feints in the summer toward contesting the state, that never materialized, and look for Wisconsin to be not nearly as dramatic this time around.