Today we continue our Road to 270 series with the Mountain State, West Virginia.

RIDGED, VALLEYED, CULTURALLY-ENCLAVED West Virginia, with five electoral votes, was not supposed to be in play after Barack Obama got waxed there in the primary. Recent polls have shown the race much tighter than expected. There is no McCain ground game in the state, and Obama has a small staff that has worked on banking early votes. Still, McCain expects to win and he should. In the context of a national landslide, West Virginia — a state that gave its vote to Michael Dukakis in 1988 — could go blue once again. 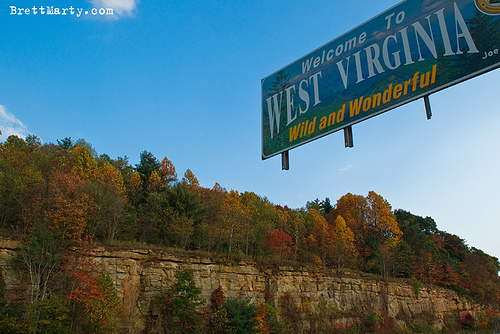 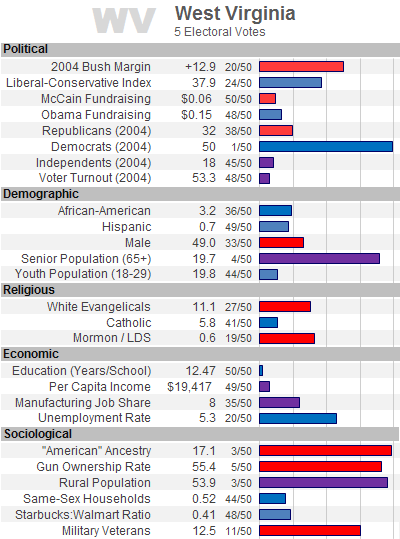 No state has less educated voters in the aggregate, terrible voter turnout rates, and Obama has terrible fundraising. “American” ancestry ranks 3d highest in this Appalachian state, and only four states have higher gun ownership rates. Few same-sex households, not many Starbucks, not many Catholics, and a very large percentage of elderly voters. Not many youth voters, and that the state went twice for George Bush helps John McCain’s chances. Culturally, the state is extremely resistant to perceived outsiders, and Barack Obama’s newness cuts against him heavily in that respect.

Ironically, no state has a higher percentage of registered Democrats than the state George Bush carried twice. No state had worse McCain fundraising, and it’s shaded more toward women than men. With 50% of the state identifying as Democrats, it should be a no-brainer. Instead, it will be a shocker if Obama pulls this culturally resistant state off. Unemployment and economic worries loom high here, and when we visited the state two weeks ago we heard that sentiment expressed from some Bush-voting small business owners who planned to vote for Obama. Obama has a better ground operation, and now the state is getting top-of-ticket visits and surrogate like Robert Byrd stumping for Obama in the closing days. Still, beyond the high Democratic partisan identification, Obama has few statistical factors working in his favor.

The closest House race is Shelley Moore Caputo (incumbent Republican) versus former Byrd aide Anne Barth. Most rank the race likely Republican, somewhere between solid and lean. It didn’t make the Republican “Death List,” so Republicans aren’t worried about it. The closer drama will be the presidential race, which nearly everyone still expects to go to McCain. When we were in the state, Tom Vogel, Obama’s State Director, told us to watch Putnam and Berkeley Counties, where if Obama were running anywhere close to even in those Republican strongholds, he’d win the state. 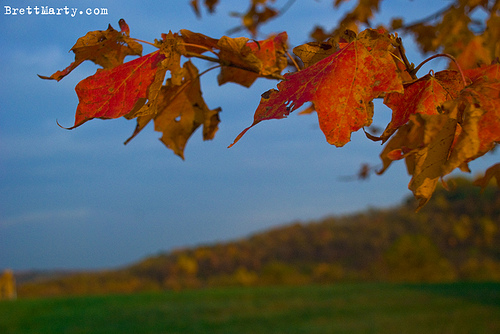