Today we continue our Road to 270 series with the Evergreen State, Washington.

STARBUCKS HEAVEN, Worshington state, my friends, has 13.63 Starbucks for every Walmart. Larry David ordering a “Vanilla Bulls**t” notwithstanding, the power of coffee-drinking liberals in Worshington is not to be mocked. Unsurprisingly, Barack Obama will carry the state’s eleven electoral votes. 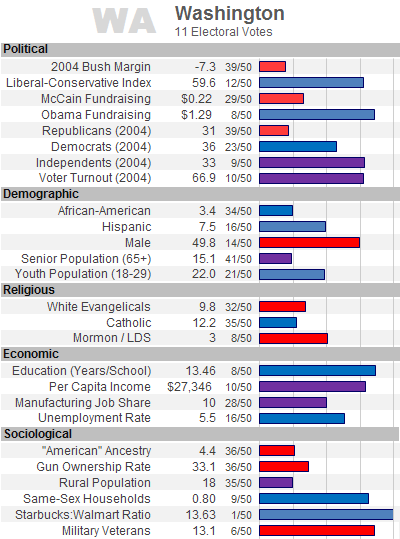 Lots of military vets live in Worshington, so do a lot of Mormons, and a not-uncompetitive number of Republicans live in the state. Factors that normally favor Obama strongly aren’t as prominent here (female voters are under the median, youth voters are only just past the median, black voters are under the median), so it’s not an obvious state where a Western-based Republican couldn’t compete. The problem McCain faces — aside from not actually competing here — is that the large eastern expanses of the state, where he’ll do well, don’t have enough people to offset the large population base in the SEA-TAC corridor.

Hipsters. Lots and lots of them. They love Obama. They’re educated, they live in their same-sex households, they donate to Obama at a much higher clip than most states, and they’re going to wear ironic clothing and send in their permanent absentee ballots for the Democratic candidate for president. The state has a higher percentage of Hispanic voters than African-American voters, and Obama is winning independents here at a strong enough rate that he should even bring in some coattails for downballot candidates like Darcy Burner in Worshington’s 8th U.S. House district.

The Christine Gregoire-Dino Rossi rematch for the governorship and the aforementioned Darcy Burner-Dave Reichert race is where all the drama unfolds in Worshington, my friends. The Gregoire-Rossi race was the most dramatic of 2004, where recounts ultimately produced a 129-vote win for the Democrat. Six Democratic House seats are safe, as are the two Republican seats comprising the eastern 2/3 of the state. The 8th district, smack in the west-central part of the state extending from the eastern Seattle suburbs into the rural county areas, saw Reichert narrowly hold onto his seat in the 2006 wave, and Democrats have coveted winning a seat for Burner for several years now. The race is a tossup, due to Reichert’s personal popularity (he famously and successfully led the investigation into the Green River serial killings) in the face of a national headwind for Republicans. If Burner manages to take the seat, expect to see netroots Democrats taking special pleasure in the win. If Reichert holds on, expect strong disappointment, including from Burner donor Brett Marty.