Today a very special guest closes out our Road to 270 series with the Old Dominion State, Virginia. Please give the Governor a warm welcome in comments. 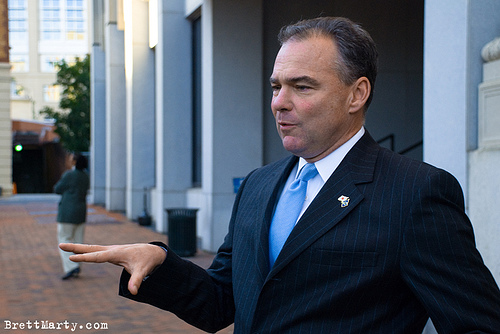 THE OLD DOMINION, THE LAND OF WASHINGTON, JEFFERSON, MADISON AND MONROE, the Commonwealth of Virginia has been the focal point of political discussion nationwide for the past few months, and for good reason. This year we have seen unprecedented enthusiasm and activity on behalf of each campaign. As Governor, I am proud to serve Virginia at such an exciting and historic moment. As a Democrat I am overwhelmed by the outpouring of support for Barack Obama, Mark Warner and our House candidates this year.

Since Mark Warner’s election as Governor in 2001 Virginia has evolved from a solid red state to a “purple” state where Democrats who bring the right message to the voters have a great chance of getting elected. In 2005 I won the race to succeed Warner in the Governor’s mansion, in 2006 we elected Jim Webb to the United States Senate and in 2007 Democrats took control of the state Senate and made considerable gains in the state House.

This year we are on the verge of casting our 13 electoral votes for a Democratic candidate for the first time since 1964. It will be a close race, but given the strength of the Democratic organization here and the desire amongst Virginians to see a change in Washington, I believe we are well positioned to make history on Tuesday. 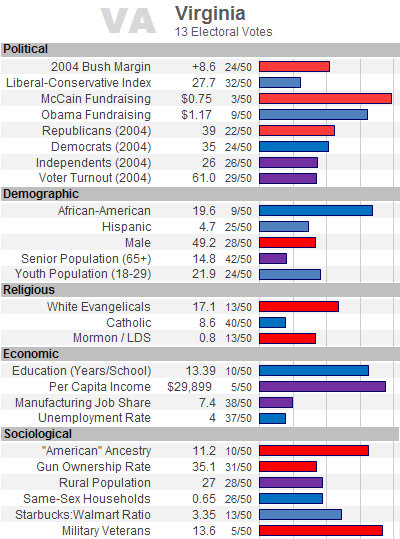 Huge numbers of military veterans populate Virginia, and only two states gave McCain better fundraising. White evangelicals rank the land of lovers just outside the top quartile, and “American” ancestry is a popular self-identifier. McCain’s national headquarters are in Virginia (the communist part, where McCain also lives), and Republicans have a 44-year history of choosing Republican electors in presidential contests.

Barack Obama has Governor Kaine and soon-to-be Senator Warner as important backers, Warner with a top notch Senate operation that will help Obama upticket. Virginia’s voter files are top notch on the Democratic side, with contested races run every single year. Each time Virginia Democrats win an important race (Warner ’01, Kaine ’05, Webb ’06, state senate ’07), the motivation cycles forward into the next goal, which this year is winning Warner a Senate seat and electing Barack Obama president. McCain irritated many Virginians, including a beautiful one, when his spokesperson Nancy Pfotenhauer divided Virginia into “real” and presumably, per McCain’s brother Joe, “communist” regions.

Demographically, Obama has high African-American vote, many amid the 438,000 new registrants Virginia has seen this year. With over three Starbucks for every Walmart, Virginia ranks in the top ten for education, and has one hell of a law school, with graduates Robert Kennedy, Sean Quinn, Ted Kennedy, Janet Napolitano, and George Allen. Er…

In the House, watch VA-02, where incumbent Republican Thelma Drake escaped defeat in 2006, but is in another tossup this time against former diplomat Glenn Nye. Democrats should also pick up retiring incumbent Tom Davis’s house seat in northern Virginia, as Democrat Gerry Connolly has an edge against Republican Keith Fimian.

As the first Governor outside of Illinois to endorse Barack Obama, I am so proud of the campaign he has run, here in Virginia and nationwide. He has been successful in Virginia this year for many of the same reasons Governor Warner and I were able to get elected here. Virginians admire pragmatic, results-oriented leaders who focus on moving us forward rather than tearing their opponents down.

Barack, Mark Warner and our congressional candidates are running strong campaigns focused on the issues most important to Virginians. On Tuesday, I believe Virginia voters will once again turn away from the old politics of division and fear and choose candidates who offer new ideas to bring change to Washington.

Thanks for the opportunity to greet fivethirtyeight’s readers, and I am looking forward to Sean and Nate’s breakdown of the results on Election Night and after. 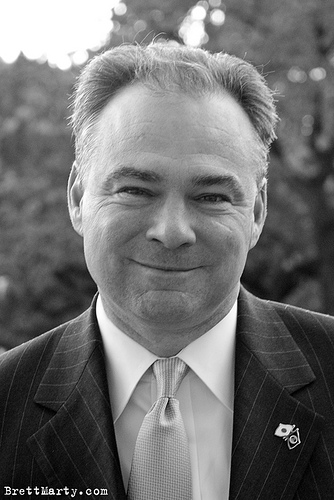