Today we continue our Road to 270 series with the Green Mountain State, Vermont.

SYRUPY AND NEWHARTISH, Vermont has three electoral votes as safe as they come for Barack Obama. However, Vermont was long a Republican bastion — from 1856 through 1988, it voted Republican in every single election except for LBJ’s 1964 rout. Before 1856, it voted straight Whig. Woodrow Wilson only failed to carry Republicans won only two states in 1912 — Vermont and Utah. FDR lost the state four times, including 1936 when only Vermont and Maine went Republican. But beginning in 1992, Vermont has gone Democratic by margins of 16, 22, 10 (Nader 2000) and 20. If Obama fails to carry the state by a floor of 20 points it would be a stunning upset. 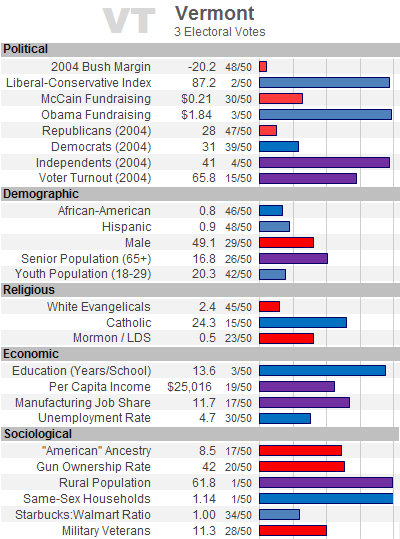 Vermonters own a decent number of guns. And the Starbucks:Walmart ratio is shockingly even for such a liberal haven: one-to-one, ranking it a mere 34th. Meanwhile, “American” ancestry is in the top third of states, and unemployment isn’t extraordinarily high. Vermont is also a very white state, with African-Americans and Hispanic voters each comprising less than one percent of the population. Vermont even replaced Howard Dean with a Republican Governor, Jim Douglas. While these small indicators come nowhere close to adding up to a McCain win, it isn’t as clear-cut from the demographic data outside of the Likert scale and Bush margins. Vermont is surprising in that the percentage of self-identifying Democrats only barely edge self-identifying Republicans.

Highly liberal, highly educated, and very strong per capita Obama fundraising illustrate why Vermont and its three votes are safely in Barack Obama’s column. Holding the highest concentration of rural voters and same-sex couples, Vermont was Kerry’s 3d best state over Bush in 2004, and only one state ranks more liberal on the Likert scale. Popular Senator Bernie Sanders even identifies as a socialist. Vermont is often the state, along with Massachusetts, that shows up in a stream of liberal-bashing pejorative labels (Volvo-driving, latte-sipping, etc.).

Vermont has no Senate seats up, Peter Welch’s House seat is safe, and this year’s gubernatorial election is safe for Jim Douglas’ re-election because Anthony Pollina of the Independent-cum-Prograssive Party is splitting the liberal vote with Democrat Gaye Symington. Democrats hold large majorities in both the Vermont House and Senate. Thus, in terms of what to watch for, the best bet is to put on a Phish album and drive to Gutterson Field House to watch some UVM hockey. Then go hunt for Ben and Jerry’s newest flavor, ChiveThirtyAte.