Today we continue our Road to 270 series with the Beehive State, Utah.

SUNSET SANDSTONE RED, Utah projects as John McCain’s safest state in 2008. It was the number one Bush margin state in 2004, and set the baseline for the most conservative state in the Likert scale. 57 percent of voters identified as Republicans in 2004 (the most) and only 19 percent identified as Democrats (2d lowest). Though Democrats are making inroads all over the Mountain West, Utah is not going to yield any time soon. Republicans hold the statewide offices as well as a 3-1 edge in state legislature representation. Both Senators (neither up for re-election) are Republican, and two of the three Congressmen are Republicans as well. Only Jim Matheson, a popular House Member who survived Salt Lake redistricting after the 2000 census, represents Democrats at the federal level. 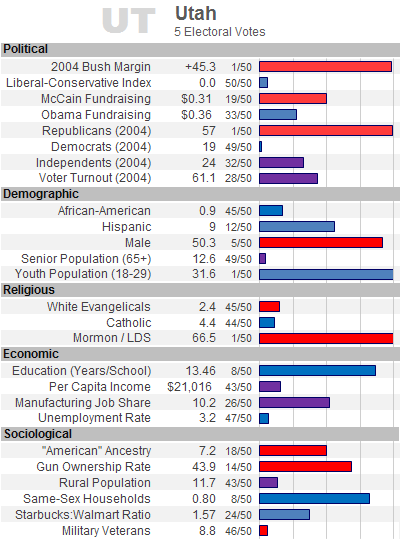 When you start out with a 3-1 edge in R to D self-identification, you’re only going to lose if you lose every state. Utah, of course, is heavily Mormon/LDS, which tracks with Republican voting. McCain almost equaled Obama in fundraising per capita, and low unemployment indicates voters here may be more satisfied relative to other voters on the economic front. Given the current economic crisis, that’s a purely relative statement.

Barack Obama did well in the caucus here in February, but a big part of that was Hillary Clinton’s anathema status in the Mountain West over gun control as well as her campaign’s decision to cede the field. Utah has the most youth voters in the country, and the 2d fewest elderly. Ordinarily that would help Obama. Utah is not a high military veteran state, a statistic that would tend to favor Republicans, and it’s fairly well educated, which favors Democrats. Utah also has a fairly high percentage of same-sex households. That’s about the best you can say for Obama’s chances in the demographic and socioeconomic data.

That’s a tough one. Like Rhode Island yesterday, there’s basically zero drama in Utah with the presidential and all three House races locked into a clear result, and I can’t quite bring myself to feign interest in the NBA with a Utah Jazz reference. Will Barack Obama get 50.6% of the undecideds in Utah? The state is one of the explicit 50-state strategy targets, and some Democratic insiders hated Howard Dean’s attempt to send staffers to train on ground activists in every corner of the nation. That, of course, was a long-term strategy, and in Utah might be a multi-decade arc if it happens at all. The bottom line with Utah this year is the way volunteers from the state will fan out into neighboring Nevada and Colorado, two of the most intense battlegrounds of the cycle.