Today we continue our Road to 270 series with the Lone Star State, Texas.

NOT A STATE TO MESS WITH, Texas has been the Republican answer to California – a huge state with many electoral votes that starts out as the foundation of the red march to 270. Despite gigantic grassroots effort in Texas on behalf of Obama since early 2007, McCain is only likely to lose Texas in a massive wave. Even as the numbers turn heavily in Obama’s favor, Texas is still safe McCain territory. Democrats have ambitious plans to return Texas to its near century-long Democratic tradition, but they probably won’t begin to be realized for several cycles. 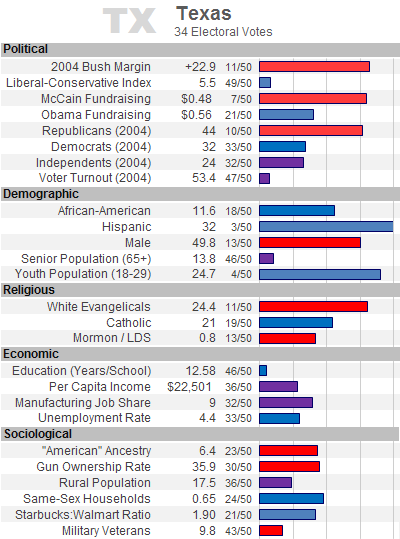 Like Obama’s advantages in California, John McCain’s Texas advantages comprise a lengthy list. To start, the state ranks 2d most conservative on the Likert scale, and the once century-long Democratic bastion split 44-32 in R-to-D partisan identification in 2004. It’s a low education state, high percentage of white evangelicals, and McCain’s fundraising numbers are nearly as robust here as in California. A higher proportion of male voters also aids the Republican. Within the state, Republicans have benefited from Tom DeLay’s redistricting after the 2000 census, even as the Supreme Court overturned the drawn borders of TX-23, ending in Ciro Rodriguez’ special election upset win over incumbent Henry Bonilla on December 12, 2006.

Texas has lots of young voters (4th highest percentage), and not many elderly voters (5th lowest percentage), both of which favor Obama. As Texas is a majority-minority state, Obama has some structural help, though Hispanic voters obviously don’t break in the same high percentages that African-American voters do. Texas Hispanic voters are the 3d highest percentage in America. Texas is another state benefiting from the late prima-caucus, as the once awful Democratic Texas voter file has had lots of effort put into its refinement.

There’s more drama in the Noriega-Cornyn Senate race, though not by much at this point, with Cornyn still polling clearly ahead. Big Bad John looks like he’ll be re-elected. Big Bad John. (What to watch for? That is a must-watch, no matter your political persuasion.) Noriega is a netroots favorite, and he’s a credible candidate in the Lone Star State. If you’re looking for an election-night shocker, this one might be a race to keep an eye on.

The other drama is whether #5 Texas can beat #1 Oklahoma in today’s big college football game. OU leads 28-27 late in the third in a nailbiter… which we could watch if we weren’t posting this from a neighborhood in Enon, Ohio covering some canvassers.