Tonight we continue our Road to 270 series with the Volunteer State, Tennessee.

HEART OF COUNTRY MUSIC, Tennessee stretches from the Mississippi lowlands to the Great Smokies. It’s a deeply evangelical state, with 20% of its inhabitants describing their ancestry as “American.” Despite going for Bill Clinton twice in the 90s, it chose the evangelical candidate, George Bush, by four points over native son Al Gore in 2000, and had it picked the home state favorite Bush would not have been president. In 2006, this was the one close Senate race Republicans managed to win, aided by an ad campaign that showed a black Harold Ford, Jr. as the object of carnal desire by white women. 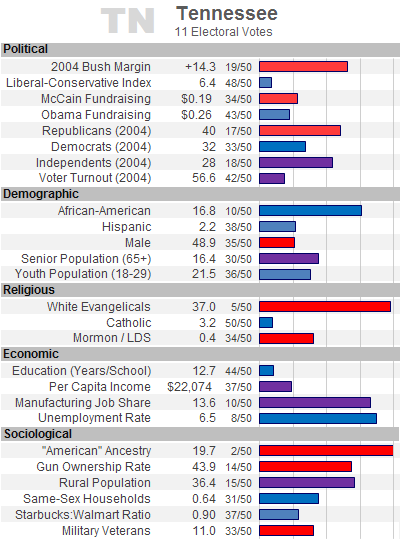 John McCain enjoys a large “American” ancestry factor in Tennessee (2d most) and a dearth of Catholics (smallest percentage). Fairly rural, fairly gun-owning, and not all that Starbuckian, Tennessee was 3d most conservative on the Likert scale in 2004. Bush won by comfortable double digits here over John Kerry, and McCain’s fundraising per capita is near Barack Obama’s. A very high white evangelical population helps McCain, as does a relatively low youth population. Just as it has lower per capita income than most states, Tennessee is on the low end of average years of education, a factor that works against Obama. McCain also has going for him that Obama’s potent organization isn’t built up in Tennessee as it is elsewhere. Obama triaged Tennessee in the primary, ceding it, Oklahoma and Arkansas to Hillary Clinton for February 5. All three states Obama has mostly ignored in the general election, and all three look to be easy double digit wins for McCain.

Tennessee has been relatively hurt by high unemployment figures, and it’s clear that economic concerns help the Democratic candidate. More female voters than the median state reside in Tennessee. A fairly high number of black voters live in Tennessee, though not enough to threaten to put the state in play. There aren’t as many military vets in Tennessee as in other places, which restrains John McCain’s vote total somewhat. All in all, however, Obama’s help from the demographics is relatively weak and sporadic, which illustrates his huge uphill climb.

Besides SEC football, about the only thing to watch here is the State Senate races, which feature a tied body 16-16-1, with the one being a guy from the NASCAR Party. You heard me. And we know it will come as a shock that he votes with Republicans most of the time. Lamar Alexander and John McCain will win Senate re-election and the presidential EVs, respectively. Gov. Phil Bredesen is term limited in 2010, so an open governor seat should inspire some action in the next cycle.

Quick note: I’ve got the same cold as Nate out here in Ohio, so we’re strugg-a-ling along, like Joe Namath pursuing Suzy Kolber, so bear with us. Obama and Biden have rallies the next few days in the state, we think we’ll be liveblogging Wednesday night’s debate from near Pittsburgh, and we hope to bring you a brief interview with Gov. Ted Strickland in the next few days.