Today we continue our Road to 270 series with the Mount Rushmore State, South Dakota.

BADLANDS AND PRAIRIE, South Dakota had the nation’s lowest unemployment several months ago, and the home of Wall Drug will be another state John McCain will collect in an effort to get to 270. While it lingers around the median in several categories (education, manufacturing job share and Starbucks:Walmart ratio), South Dakota has a higher percentage of white evangelicals, Catholics and Mormons. What do you get when a Catholic, an evangelical and a Mormon walk into a bar? A bad joke, probably, and you also get South Dakota. 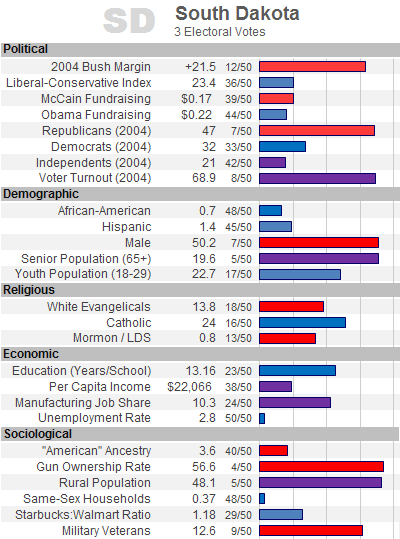 South Dakota features a few notable sociological factors in John McCain’s favor: more than half of South Dakotans own guns, and only two states have a lower percentage of same-sex households. It’s also a higher than normal military veteran state. McCain has nearly equal fundraising figures per capita as Obama here, always a good sign for the Republican this cycle. South Dakota is also very male, very non-black, very non-Hispanic, and has a higher percentage of elderly than most states, which in this election would seem to favor McCain, even as he tanks among older voters worried about things like retirement and Social Security in this economic crisis. Last but not least, Republicans still enjoy a large structural partisan ID advantage in South Dakota, one that helped George Bush win by over 20 points and one that had a 15-point gap in partisan ID-hood in 2004.

A decent population of younger voters, as well as a large Native population with whom Obama does extremely well. Obama was expected to do much better in the primary here, however, and fell short of expectations despite widespread support among the state’s superdelegates. Obama could wind up getting this state down into single digits, but this is also a ticket-splitting state, and many will opt to vote for McCain, Johnson and Herseth-Sandlin.

Not much drama in South Dakota. Safe seats abound, including freshman defender Tim Johnson in the US Senate. After Johnson’s 2006 stroke, many Republicans openly speculated that his seat was up for the taking. Johnson’s seat is safe, as is Stephanie Herseth-Sandlin’s House seat — South Dakota’s lone Congresswoman. All we can really tell you about what to watch in South Dakota — not even the state legislative races hold much drama in terms of control (both should remain in Republican control), is that Deadwood is still the best TV series of all time, tied for #1 with The Wire. So watch it.