Today we continue our Road to 270 series with the Palmetto State, South Carolina.

LAND OF COLBERT, South Carolina’s eneagled and superstantial gift of eight electoral votes to megaamerican John McCain mark it the land of freem (freedom without the “do”), though the state’s secessionist history makes it hardly Lincolnish. More like grippy. 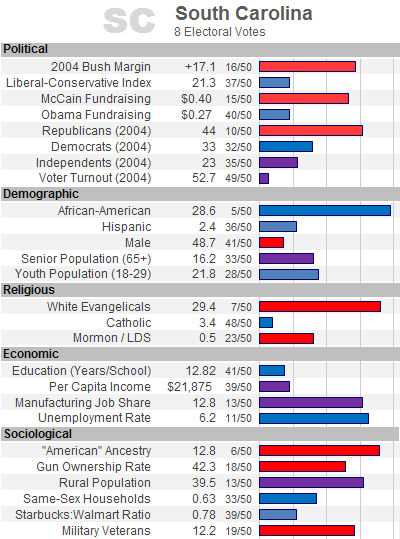 South Carolina, home to McCain’s infamous 2000 campaign momentum stopper, is a safe state for him this time. A huge number of Christian conservatives live here, and not many Catholic voters that tend to favor Democrats. “American” ancestry is big favorite here, and indeed John McCain’s clear fundraising edge on Barack Obama is an anomaly. Low education rates and higher gun ownership rates weigh in McCain’s favor, as does a better-than-median percentage of military veterans. South Carolina has outperformed the national Republican average by double digits for six consecutive presidential elections, and will do so again when John McCain collects its eight electoral votes.

Barack Obama can count on a very high degree of support from African-American voters, which place it 5th nationally. The state is in the top ten in percentage of female voters, and South Carolina’s traditionally awful turnout rates — worst on the mainland — could allow for a Democratic surge to pull the race into single digits if one assumes such a surge would come from excited Dems. Unemployment is relatively high in South Carolina, which might push economic concerns a bit higher on the list of deciding factors. Obama dramatically overperformed the polls here in the primary, and if a reverse Bradley effect exists, it might appear in a state like South Carolina.

South Carolina has one Senate race, Lindsey Graham’s safe seat, and safe seats in nearly every House race on both sides. If there were one House race to watch in a wave year, it would be SC-01 along the coast, where incumbent Republican Henry Brown, Jr. faces a challenge from Democrat Linda Ketner. The race is lean Republican, and doesn’t appear to be one of the likely wave candidates, but relatively speaking this is South Carolina’s closest race.