Today we continue our Road to 270 series with the Beaver State, Oregon.

CASCADING FROM DESERT TO SEA, Oregon is simultaneously extremely liberal and extremely conservative, with a fair number of independents thrown in the mix for good measure. As much as any state, its overall demographic data can be a little misleading. For example, “gun ownership rate.” The gun ownership disparity between liberal Portland and conservative eastern Oregon is wide. Oregon also boasts the smartest and best voting process, as all ballots are mail-in. As a result, Oregon has one of the best voter turnout rates in the country, minus the long lines. 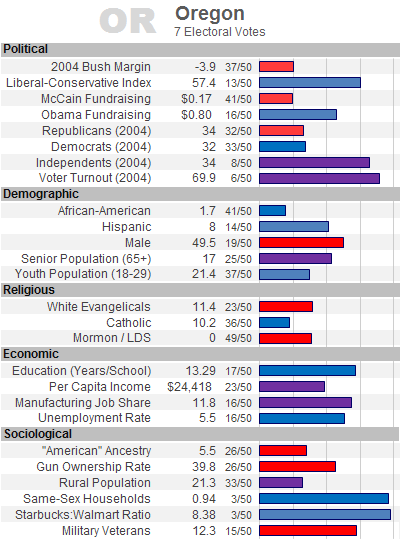 John McCain will run strong in the eastern 2/3 of the state, what is essentially the 2d congressional district. A high percentage of military vets live in Oregon, and Republicans actually outnumbered Democrats in terms of self-identification in 2004. The state doesn’t have a high number of minority voters, but given the looming influence of Portland with its larger population base, Oregon scores out in much of our demographic data as not particularly hopeful for John McCain. The areas that are Republican are really Republican, white evangelical, “American” ancestry, gun-owning areas that probably rabidly oppose Barack Obama. It truly is the Obama v. Nobama election in Oregon.

Same-sex households and Starbucks:Walmart both rank 3d nationally, giving a pretty strong indication of Democratic voting, as well as underscoring that the liberal bastions of Oregon are pretty strongly liberal. Obama enjoys one of his higher fundraising-per-capita locales, as well as a realtively (top-third) education rates. Unemployment is in the top third, making the economic malaise a bit more pronounced in Oregon, and the state went for both Gore and Kerry pretty handily. Barack Obama will win the state of Oregon.

Oregon’s mail-in system allows for the field operations to see well in advance where the turnout seems strongest and where it needs a boost. As a result, if any of the candidates or their running mates show up with a surprise visit in Oregon in the final two weeks, you can probably infer that the internal numbers are telling the campaigns that a big jolt is needed in an underperforming area.

The other thing you might infer, particularly from Barack Obama’s campaign, is whether he has a day to boost Jeff Merkley’s Senate chances. That’s the big race in Orgeon this year, as incumbent Gordon Smith runs away from John McCain and toward Barack Obama, as he has been doing all year. Obama stumping for Merkley might be interpreted as an indication that Obama thinks he’s already going to win big nationally, now he wants both as many Democratic Senators as he can get and a Senator who owes him credit for helping him get over the hump by boosting turnout.

Oregon also gives me an opportunity to re-dsiplay for you one of my favorite charts Nate’s done this year, one that many of our visitors haven’t had a chance to see. It’s fascinating, and you can see why the Mountain West is right on the cusp of many Democratic flips (NM, CO, NV). 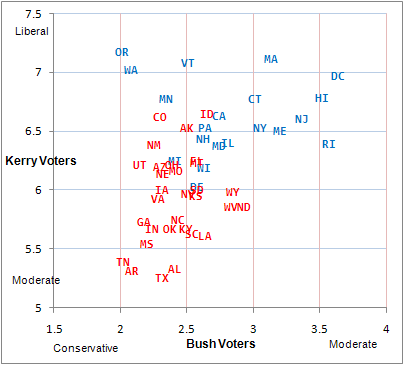