Note: Over the course of the next two months, we will be previewing the Presidential Election matchup in each of the 50 states. The previews are built around a key set of demographic variables in each state. We continue with the Sooner State, Oklahoma.

WHEN THE WIND comes sweeping down the Oklahoma plains, it sweeps Republican red. Only once since Truman – the LBJ landslide – has Oklahoma chosen a Democrat over the Republican for President. Ironically, Democrats hold nearly every statewide office (governor, AG, treasurer, education secretary, labor and insurance commissioners, etc.), but at the federal level the only Democrat is Representative Dan Boren in OK-2, and he has not endorsed Barack Obama. No wonder, then, that our projections show John McCain beating his rival by over 27% on election day. 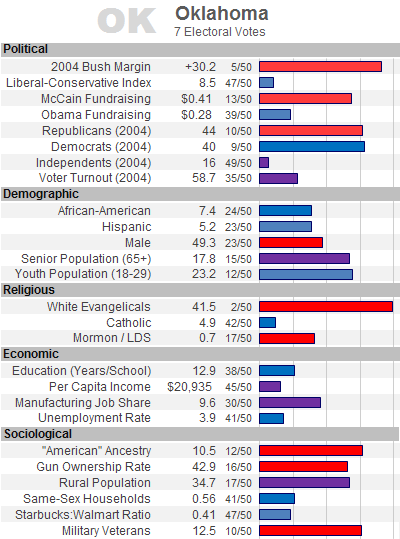 What’s not to like? Politically, this was a top-5 Bush state in 2004, and a top-5 conservative state on its Likert score. McCain out-fundraises Obama here, and 44% of the voting population are registered Republicans. There are lots of military veterans here, as well as the 2d highest percentage of white evangelicals, a group that strongly favors McCain over Obama. Social factors like same sex marriage and our vaunted Starbucks:Walmart ratio place Oklahoma in the most McCain-favorable 20%. Relative to the rest of the country, incomes are lower, the education rates are lower, but employment rates are higher. If high unemployment is thought to cut against the incumbent party and higher education rates track with Democratic voting, McCain has little to fear in those factors.

It’s a stretch to say Obama has anything going for him in Oklahoma beyond generalized wrong track dissatisfaction, which will be far from enough for him to be competitive here. Oklahoma has a relatively high (top 25%) youth population. Demographically, that’s about it. Obama has ignored Oklahoma, not visiting during the primaries or the general election so far. Despite the 50-state strategy, it would probably take a natural disaster like last year’s killer tornado that hit Greensburg, Kansas to get him to make a trip. His 31% share in the primaries foretells the eventual outcome in the general election.

Watch the Senate race between Andrew Rice (D) and James Inhofe (R). While our projections show Inhofe winning comfortably and we still list the race as “Safe GOP,” recent polls have shown Rice becoming more competitive, and it’s a far closer race than the presidential blowout appears to be. Chris Cillizza focused on that race this week, noting that polls showing a tightening race (from 20 to 9 points) were not strongly disputed by Republicans. This is still a far cry from saying that Rice, a netroots favorite, will win his race. In fact, it’s a little bit reminiscent of the Brad Carson-Tom Coburn Oklahoma Senate race in 2004, which Coburn ultimately won by double digits.

In short, there’s little drama in Oklahoma this year, and both campaigns have certainly chalked it up in McCain’s column. It will be interesting to see whether Obama puts any organizing resources here; the campaign says it will put some staff in every state. Also, it will be curious to see whether Inhofe tries to tie Rice to Obama, and whether that strategy will finally work (it didn’t in three special elections in the spring). If it were going to work somewhere, it probably would in a state that Obama has seemingly snubbed.