Tonight we continue our Road to 270 series with the Peace Garden State, North Dakota.

WOODCHIPPY AND SNOW-BLOWN, North Dakota and its citizens must feel honored this year to have its accent represented on the national ticket in such a high-profile fashion. So, too, the state’s electoral votes are more in play than at any time in recent history. Gerald Ford won the state by 6 points in 1976, and Bob Dole won by a mere 7 points in 1996, and John McCain threatens to either go below that number or fail to win the state at all. If Barack Obama becomes the only Democratic presidential candidate to win North Dakota since LBJ, he can claim a mandate. 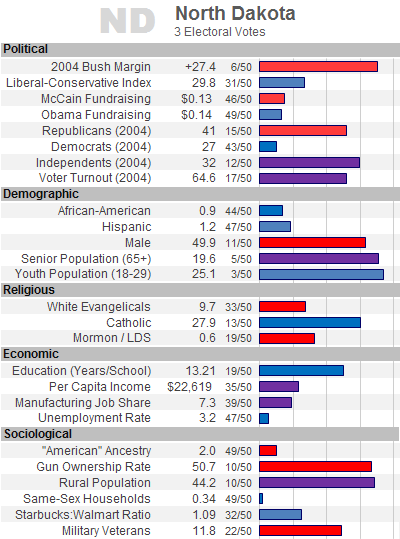 John McCain starts from the standpoint that North Dakotans (Hoosiers?) voted for George Bush by a nearly 2-to-1 margin in 2004. In fact, North Dakota only voted once for a Democrat for President between 1940 and 2004: LBJ’s landslide year. It chose the Republican every other time. The second fewest percentage of same-sex couples call North Dakota home, the state has a higher percentage of male voters, and minimal numbers of black and Latino voters (there are many more Native voters). Just as the state’s high young-voter population favors Barack Obama, McCain’s campaign is boosted by the state’s rank as having the 3d highest number of voters over 65. McCain actually has almost the same fundraising as Obama, albeit each with very low figures.

Though Barack Obama pulled most if not all of his paid staff out of North Dakota before the race was blown wide open, the only two public polls in October show the race tied, and, alternatively, Obama up 2 points. North Dakota has the second fewest percentage of people listing “American” for ancestry, and the 3d highest percentage of voters under 30 (over 25%). If youth voting turns out to be a national wave, then Obama might disproportionally benefit from that boost in a place like North Dakota.

Neither Senate seat is up in 2008 (held by Democrats Byron Dorgan and Kent Conrad), Democrat Earl Pomeroy’s House seat is safe, and Republican Governor John Hoeven’s re-election is assured, so all the action is in the presidential race. We currently project the race as the state McCain will win by his most narrow margin, at a mere 2.4 points. North Dakota has one of the most open voting laws in the nation, as the only state that does not do voter registration. All legal residents may show up to the polls and vote. From a ground game perspective, the removal of a voter registration component simplifies the task. Keep an eye out for further North Dakota public polling in the closing days. The other thing to watch is whether St. Louis Blues top prospect rookie and former UND Sioux hockey star T.J. Oshie will vie for the Calder Trophy in his rookie season.