Note: Over the course of the next two months, we will be previewing the Presidential Election matchup in each of the 50 states. The previews are built around a key set of demographic variables in each state. We continue with the Tar Heel State, North Carolina.

A CONTRAST OF CORES, North Carolina is a proving ground for Barack Obama’s big bet on strategy. Based on recent history, North Carolina should be a Republican state in the presidential column again this year. However, polling data already projects a significantly closer race than during the two Bush elections, a reality that North Carolina Republicans openly acknowledge. Throughout the summer, we’ve projected an approximately five point John McCain win. However, if Obama can somehow take North Carolina and its 15 electoral votes, not only will he likely win the election, it will vindicate the grunt-work organizing approach to campaigning as opposed to the astroturf-ish select-a-veep electoral addition theory (see: John Edwards, 2004).

If McCain can keep his base fired up, North Carolina should remain Republican. Since LBJ famously lost the South for Dems by signing the Civil Rights Act, only once – the southern Dem Carter/Watergate year of 1976 – has North Carolina voted Democratic at the presidential level. However, a quickly growing population and burgeoning Research Triangle base continually teases Democratic hopes. It’s this Democratic strength among core groups of white liberals (that a state like Mississippi doesn’t have) that makes North Carolina seem more attainable. To win the state, Dems have to maximize all their edges and the Republicans have to be just unenthusiastic enough to allow Dems to catch them off-guard. 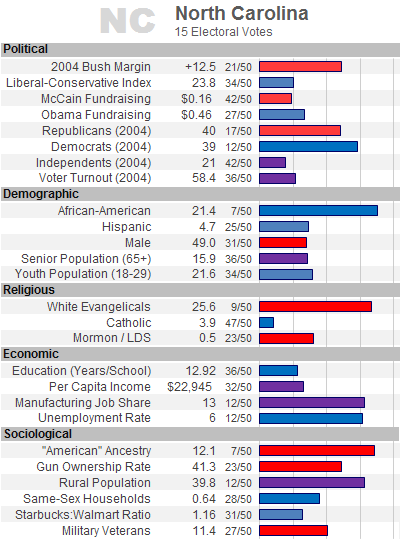 Demographically, McCain’s success depends in some significant way on his ability to fire up religious conservatives, Appalachian voters and military-base-supporting towns. North Carolina is a top-20% white evangelical state and a very low-percentage Catholic state, two factors we notice track with better Republican performance. With its significant jutting into Appalachia, “American” ancestry also scores highly relative to other states. Those are the areas where Hillary Clinton dominated Obama in the primaries, the ridged-and-valleyed enclaves naturally resistant to new movement and openness to outsiders.

The comfortable Bush margin and conservativeness of even many Democrats will also help McCain here. North Carolina has some military towns that one would expect to see McCain use as a campaign-stop backdrop at least once or twice. Again, provided turnout is at least normal, this built-in ideological and partisan edge should be enough to hold off a furious charge by Obama.

High African-American population that Obama hopes to register and turn out at record numbers. If pollsters misjudge black turnout on the low end when they weight their likely voter models, Obama could surprise, and his organization suggests that’s precisely what he’s aiming for. (When FiveThirtyEight nailed the North Carolina primary result but pollsters missed it, one major factor in success or failure depended on demographic assumptions in AA turnout.) Per the NYT, Obama holds the same 150-to-12 paid staff edge reported in Missouri. North Carolina also has some heavily concentrated Hispanic towns that make for more efficient organizing efforts. As in most states, Obama leads McCain in per capita fundraising. Northern retirees settling along the coast and in the mountains are subtly moving the demographics in Obama’s direction, and the academic and high-tech job transplants in the Research Triangle are the big targets for new voter registration and persuasion. Obama’s affinity for basketball in this hoops-crazed state probably doesn’t hurt either.

Overall, the demographic game plan isn’t very complicated here. To win, Obama has to maximize turnout among his core voters. Massive registration effort has been underway for some time and the numbers were already rolling in during the primary season and early summer before most of the paid organizing boots were on the ground. Early voting will be a key feature of the plan to win, and a two-plus week window starting in mid-October will clearly help Obama’s better-organized group.

Keep an eye on the excellent NC State Board of Elections site, which updates voter registration by party daily. Also keep an eye on late-October reports about early voting turnout. We’ve suggested that 5% is probably the outside edge of ground game bump measured against accurate polling of voter preference, and North Carolina has been straddling our Battleground/Penumbra States 5% line for the summer months.

There’s also a potentially very competitive Senate race here as Democrats try to reach the filibuster-proof 60, with Kay Hagan (D) challenging Elizabeth Dole (R) for the old Jesse Helms seat. While Dole still leads (and is projected by roughly the same margin as McCain), recent polls show her lead softening. Dole has had trouble keeping her popularity high, and the DSCC will certainly pour money into the race.

Also watch to see how much racial politics plays into local advertising and whether any further trial balloons are sent up here. This spring McCain had to reject and denounce a state Republican Party ad tying Obama to Jeremiah Wright as “degrad(ing) our civics.” We’ll see whether that stance holds, as McCain’s campaign says Wright is now fair game. Though voter attitudes toward race in North Carolina have certainly shifted with time and the new demographic influx, this was the site of the infamous “Hands” ad that helped Jesse Helms scare voters that a would-be black Senator would make sure blacks got jobs over whites. The more dogwhistling you see, the closer the internal polls probably show the race.

Finally, check how often Obama visits the state. Having spent time there this week, he is certainly acting like a candidate making a significant play for those 15 EVs. However, this is pre-convention. Watch to see what happens after the convention in the closing days to get a feel for where those internal polls put the race in the Tarheel State.