Today we continue our Road to 270 series with the Empire State, New York.

HOME OF THE DAILY SHOW’S WORLD HEADQUARTERS, New York is expected to be one of the first states called on Election Night for Barack Obama. The biggest action in New York in the presidential election this year is Tina Fey’s SNL caricature of Sarah Palin, which has impacted the race to the point that the McCain-Palin campaign is finally and belatedly pushing back against the sketch comedy mainstay. 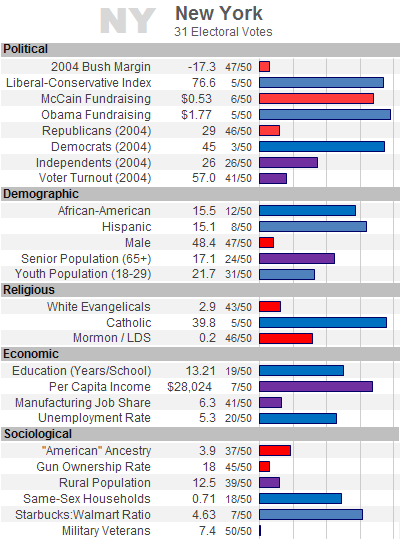 McCain raised a lot of money here, and a relatively lower number of voters under 30 live in New York, but that’s about where the good news ends for John McCain in a state that will see its 31 electoral votes be called quickly for Barack Obama. There isn’t a single other statistic in our chart besides low voter turnout that looks good for him.

Only three states went by wider Democratic margins in 2004, only four states rate more liberal on the Likert scale, and there are over 50% more self-identifying Democrats than Republicans. Only two states have more Democrats by self-identifying percentage, only four states have fewer Republicans. Many minority voters, a large percentage of Catholic voters, and the lowest percentage of military veterans all boost the Democrat’s chances. While same-sex household rates rank near the middle of the pack, this is a big Starbuck:Walmart state. Not many white evangelicals and a tiny percentage of Mormons, very few gun owners, and only three states have a higher percentage of women voters. Barack Obama enjoys the command position in a state whose electoral votes — due to the Empire State’s large population — equal Oklahoma, Kansas, Nebraska, South Dakota, North Dakota, Idaho and Wyoming combined.

The federal-level action in New York this year is in the House, where at least two seats appear poised to flip R to D due to retirements, Jim Walsh’s 25th Syracuse district and Vito Fossella’s 13th Staten Island district. Just as both of those seats are rated “Lean D” by the Cook Political Report, Republican incumbent Randy Kuhl’s 29th district seat is also extremely vulnerable due to a very strong challenege by Eric Massa. Outside of Buffalo and just north of the 29th is the toss-up 26th, an open seat being vacated by Tom Reynolds. If all four seats turn out to be Democratic pickups, only two Republicans will remain in New York’s caucus.