This Road to 270 to you is brought to you by our guest Steve Goldman, my friend and colleague at Baseball Prospectus” and a resident of the Garden State.

As they have for nearly 54 years, New Jersey’s license plates, when they’re not promoting the eponymous battleship moored in Camden or supporting animals through the Mutts characters, still say “Garden State.” This nickname often has a kind of quizzical irony associated with it, likely because the way that many visitors to New Jersey first interact with the state is through its most densely packed, wholly paved over, post-industrial section adjacent to Newark Liberty Airport. Similarly, traveling by car from New York City to Philadelphia will result in exposure to some truly noxious odors, be they from the refineries near Turnpike exit 12 or the artificial food-flavoring labs at 8A. Visitors have been bitching about the trip since 1722 at latest, when Benjamin Franklin, unable to find work in Manhattan, took a boat to Perth Amboy and walked all the way across the state trying to get to Philadelphia, finding lots of swamp gas but little in the way of good restaurants—a problem which persists to this day.

Yet, despite the seemingly post-apocalyptic landscape that greets the newcomer, New Jersey is a highly varied place, both environmentally, and yes, politically. The 10th-most populous state, a 15-Electoral Vote prize, possesses vast swaths that remain rural and unpopulated, at least relative to the rest of the state. Many of these areas are devotedly conservative, as this Congressional distract map suggests. The fifth district, where pro-drilling, pro-life, pro-gun Republican Scott Garrett is defending his seat against blind rabbi Dennis Shulman, has just been upgraded from “emerging” to a potential “Red to Blue” by the DCCC, but no Democrat has emerged from there in living memory.

Because of the state’s bifurcated, almost north-south divide of the state, and despite being wedged between the theoretically influential larger states of New York and Pennsylvania, politically New Jersey marches to its own beat. This is, after all, the state whose voters elected political pariah George McClellan as Governor, sent the corrupt red-baiter J. Parnell Thomas to seven terms in the House, and nearly voted Bill Bradley out of the Senate in 1990 because they were mad at then-governor Jim Florio. Historically, the state has a long history of ending up in the red column (with a notable exception being 1864, when it went for apparent crush McClellan over Abraham Lincoln). After supporting Franklin Roosevelt in all four of his presidential campaigns, it turned red and stayed that way for most of the next 40 years, going for Thomas Dewey, Dwight Eisenhower, Richard Nixon, Gerald Ford, Ronald Reagan, and George H.W. Bush. The only exceptions came in 1960, when John F. Kennedy earned a narrow, one-point win, and 1964, when the state enthusiastically participated in Lyndon Johnson’s landslide win over Barry Goldwater.

New Jersey began its shift to the Democratic side of the ledger, at least on the presidential level, with the election of 1992, when Bill Clinton converted the state by just two points. Clinton received a more convinced endorsement in 1996, when he took the state by 18 points. Al Gore received a nearly identical level of support in 2000. John Kerry received a more qualified seven-point victory in 2004.

Until relatively recently, New Jersey resisted putting its entire Senate delegation in one party’s basket. That practice came to an end in 1979, when Bradley took over the seat that had long been in the hands of Republican Clifford P. Case, joining longtime Democratic Senator Harrison Williams. Since then, but for an eight-month period in 1982 when future Treasury Secretary Nicholas Brady was appointed to take over for Williams (who had resigned after being caught up in the Abscam scandal), the delegation has been in Democratic hands. No Republican has won a senatorial election in New Jersey since Case’s successful 1972 reelection campaign, and polling suggests that 83-year-old incumbent Frank Lautenberg has little to fear from former 12th district congressman Dick Zimmer. Of the remaining house races, only open seat competitions in districts three and seven, both formerly held by Republicans, are expected to change control, though polling is not yet definitive. Were those two seats to go Democratic, the balance of the House delegation would increase from 7-6 in favor of the Democrats to 9-4. 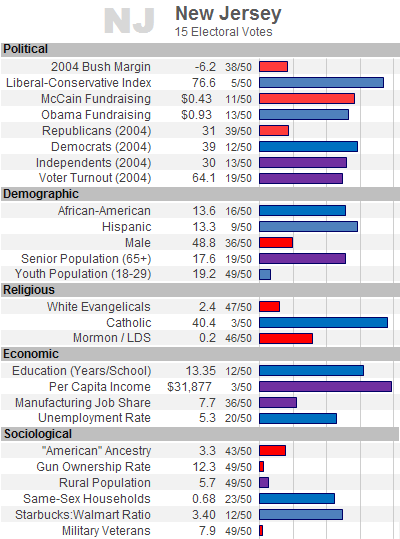 WHAT MCCAIN HAS GOING FOR HIM

On paper, several things, though these haven’t translated to the polls. To begin with, the state’s “maverick-y,” unpredictable political moods (evidenced by the relatively large percentage of voters identifying as independent), which tend towards quick emotional swings and a great deal of anger against whomever the voters feel has most recently screwed them. Usually that person is the governor, often a Democrat; for decades, the state has been locked in a vicious cycle in which Democratic governors have to clean up fiscal failures on the part of their predecessors, almost always Republican governors. This hostility is currently focused on Democratic governor Jon S. Corzine, who as of earlier this month had a 45-39 approve/disapprove rating. New Jerseyans are particularly sensitive to the threat of tax hikes, as they pay some of the higher income taxes and the highest property taxes in the country (public education is largely funded by local property taxes). In 1990, a one-percent increase to the state sales tax led to a Republican takeover of the legislature, the rise to prominence of Christie Todd Whitman, and a popular movement to impeach then-governor Jim Florio.

New Jersey, perhaps sensing the brie-like consistency of John Kerry, offered him soft support in 2004. In the current election cycle, McCain has done well in fundraising despite the low number of self-identifying Republicans. The state population is also on the old side (with the high cost of property/high tax rate, the young find it an expensive place to establish a household), depriving Obama of the youth vote that is expected to swell his tallies in other states. Finally (again, on paper), the recession hasn’t yet hit New Jersey as hard as it has other parts of the country. While housing prices have fallen, New Jersey’s official unemployment rate slightly lags the national rate (5.8 percent to 6.1 percent through September).

WHAT OBAMA HAS GOING FOR HIM

New Jersey ties New York among the top five states that self-identify as liberal. Obama has successfully exploited New Jersey in the fundraising race. Falling housing prices have hit the always difficult New Jersey real estate market like a ton of bricks, a real blow in a state where a home really is an investment. New Jersey holds large numbers of minority and female voters, and New Jerseyans like to turn out at the polls. Evangelicals are as rare as street parking in Princeton. …And for what it’s worth, favorite son Bruce Springsteen supports his candidacy.

WHAT TO WATCH FOR

The state seems to be in the bag for Obama; successive polls released on the 17th and 18th of this month had him at +17 and +23 respectively. What remains to be seen is whether the state is truly trending bluer overall, even in longstanding Republican-held areas. According to the Cook Partisan Voting Index, just two New Jersey districts have anything like a solid Republican leaning: the aforementioned 5th ranks as an R+4, and the 11th, held by Rodney Frelinghuysen (of the politically dynastic Frelinghuysen family), as R+6. Two others, the 4th (Chris Smith) and the 7th (open) are rated as R+1. The 2nd district, held by Republican Frank LoBiondo, is called a D+4, though it appears to be safe. In summary, nine of 13 districts slant Democratic, and Republican support is soft in two others. If, early on election night, any of the Republican districts waver, particularly the hardcore Red 5th, it could augur a night of dramatic change.

Steven Goldman is a contributing editor at Baseball Prospectus, where he writes about history, writes the Pinstriped Bible column for the YES network, and blogs about politics at Wholesome Reading.