Today we continue our Road to 270 series with the Granite State, New Hampshire.

INDEPENDENT AND DARTMOUTHY, New Hampshire provided one of the most dramatic primary night results in recent memory, as it re-birthed John McCain’s previously buried candidacy and re-steeled Barack Obama’s campaign to fight all the way through the finish line. It also puts its state-controlled liquor stores on median islands right on the interstate. So, there’s that. To paraphrase Daniel Webster, it is, sir, as I have said, a small state, but there are those who love its four electoral votes. 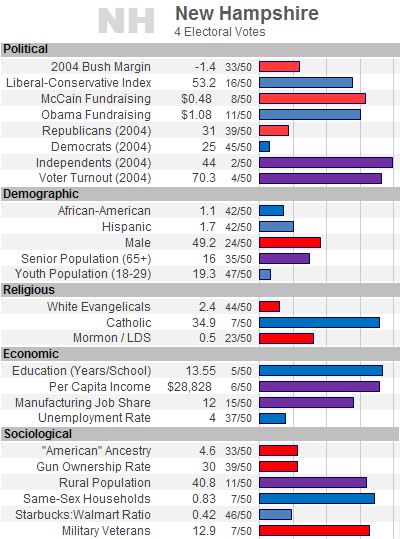 New Hampshire is the state that has twice given John McCain’s campaign for the presidency life, so he has every reason to believe he’d do as well as any Republican could in this increasingly blue New England state. A high number of military veterans and an antipathy for taxes (many among the Boston commuter population lives across the border in New Hampshire to take advantage of lower tax rates) aid McCain’s popularity. So, too, a low percentage of voters under 30 (4th fewest) help McCain blunt Obama’s demographic edge. McCain has relatively strong fundraising in the state, and the reality that only a quarter or so of voters identify as Democrats with a huge independent population gives him his best shot to pick off a Kerry state this year. Most importantly, voters in New Hampshire know McCain. He’s spent so much time in the politically active retail politics state that voter familiarity will help him squeeze every last drop he can out of the Granite State.

Winning New Hampshire will be especially satisfying for Barack Obama, for it was here his campaign confronted a defining moment during the primary. Where some campaigns begin internal finger-pointing, the Obama campaign accepted the defeat and embraced the idea that it would fight tooth and nail in every corner of the nation, for every vote, until the race was finished. Just as the campaign steeled itself internally, Barack Obama gave a public speech for the ages in defeat. As for our demographic breakdowns, New Hampshire is more open to same-sex couples but Starbucks remain low because Dunkin Donuts dominates the state. Fewer than the median own guns, and the education rate is very high, placing the state 5th. The state went to George Bush by 1% in 2000 and John Kerry by 1% in 2004, so it has been very close in recent elections, but antiwar sentiment is high here. Just as John McCain played retail politics well in New Hampshire, so too did Barack Obama. Obama will almost certainly win the state’s four electoral votes.

New Hampshire features a lot of action this year, with Jeanne Shaheen trying to unseat John Sununu and leading in the polls. House Democrats Carol Shea-Porter and Paul Hodes, in the first and second House districts respectively, pulled off two of the most stunning wins in 2006, and now face freshman defenses. Hodes has an easy race, but Shea-Porter finds herself in a tossup against Jeb Bradley. In the presidential race, Obama leads McCain comfortably and has been at or over the magic 50 number in every public poll in October, except… wait for it… Zogby Lite-Brite Zogby Interactive. The kiss of death for McCain, Zogby thinks it’s close.