Today we continue our Road to 270 series with the [Nate] Silver State, Nevada. 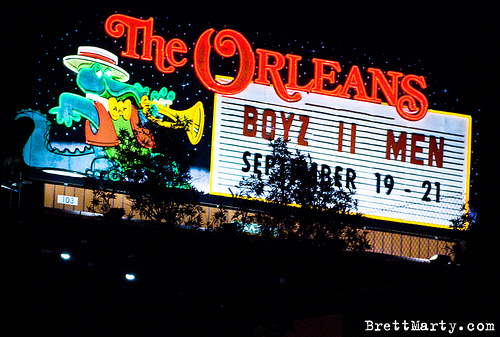 GAMBLY AND WHORISH, Nevada is one of 2008’s biggest battlegrounds. Its caucuses were debacles on both the Democratic and Republican side (Democratic attendance overwhelmed a totally unprepared Nevada Democratic Party, and Ron Paul voters forced the Republicans to discard the rules and appoint loyal delegates). As we’ve been tracking for some time, Washoe County (19% of the state’s vote) has flipped blue, with 1,264 more Democratic registrations than Republicans, who held a 17,500 vote advantage in August 2007. Overall, Democrats have moved up to a 111,559 registration edge from the approximately 4,100 edge they held four years ago. Due to the huge change, Republicans are left scrambling to challenge the validity of votes by apparently finding anyone who will agree to sue:

While talking to Smith, she was interrupted by a cell phone call, which she inadvertently put on the speakerphone. It was the state GOP executive director Zachery Moyle, and the two discussed what could be done about the tsunami of Democratic Party registrations.

“I’m looking for people to sign on to a lawsuit,” Moyle said to Smith, who fumbled with the phone while turning off the speaker. “You didn’t hear that,” she said glancing in my direction. 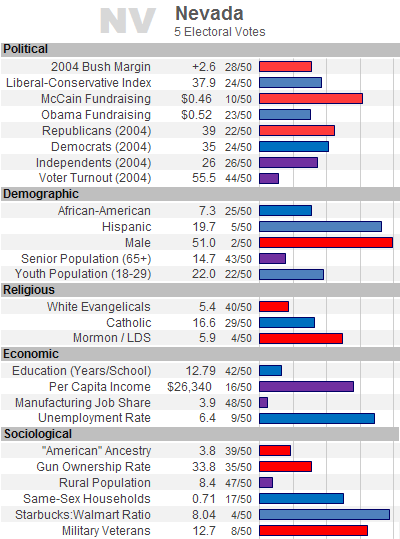 Many military veterans, a long time Republican lean to the state’s politics, and nearly even fundraising per capita with Barack Obama will help John McCain. Nevada felt to us more organized and energized on the Republican side when we visited, compared with places like New Mexico and Colorado, but again that is relative, since we’re not excited about any of the Republican effort on the ground anywhere. But this is a very male-voting state, contains a high number of conservative Mormon voters, the education rate is very low, and voter apathy among youth voters has long been a problem in Nevada. The Republican organization is used to winning elections and knows who its voters are. Republicans will get their voters to the polls, it’s up to Democrats to pass them by.

An incredible ground organization that dwarfs the Republican effort, to start with. Those dedicated organizers shifted over 107,000 voter registrations in the Democratic direction. A very large Latino population will help Obama here, as well as a high unemployment rate that tends to favor Democrats. The Starbucks:Walmart ratio is over 8-to-1, and same-sex households rank in the upper third. The Clark County population, continually booming and shifting blue, will be a big help. John Kerry lost Nevada by 21,500 votes four years ago, and 5 times that number of registration shift has happened because Obama organized aggressively here for over a year. The population shades to the younger side, with fewer voters over 65 and an above-the-median number of voters under 30. Not many “American” ancestry respondents either.

Three big races in Nevada — the presidential race, which favors Obama, and two House races. Incumbent Jon Porter is in a tossup contest with Dina Titus, who unsuccessfully ran for Governor two years ago. Turnout will be the key, and the incredible Obama operation will help a rising tide lift all boats. Jill Derby (D) and incumbent Dean Heller (R) are in a rematch from two years ago in the 2d House district, which encompasses all of the state minus most of Clark County, and Republicans worry they will lose this seat in a wave. Derby is a good candidate, and has worked the rural parts of her district for years. People know her, and it’s not hard to envision some McCain-Derby voters. Heller remains favored, but this is one of those that every last drop of GOTV has to make the Heller folks very nervous. 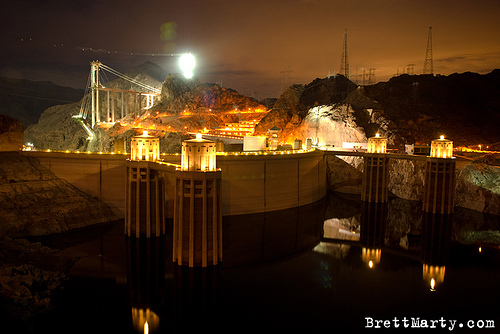