Today we continue with our Road to 270 series with the Cornhusker State, Nebraska.

WHERE FOOTBALL IS RELIGION, Nebraska would ordinarily be as straightforward in the presidential electoral discussion as a Tom Osborne-era Big Eight title. However, there’s a little quirk everyone needs to understand about Nebraska. Along with only Maine, the state allocates its electoral votes by congressional district (one per CD) and two for the statewide winner. John McCain is going to win four Nebraska electoral votes for sure, and there may be a battle for the final EV — Nebraska’s 2d congressional district. 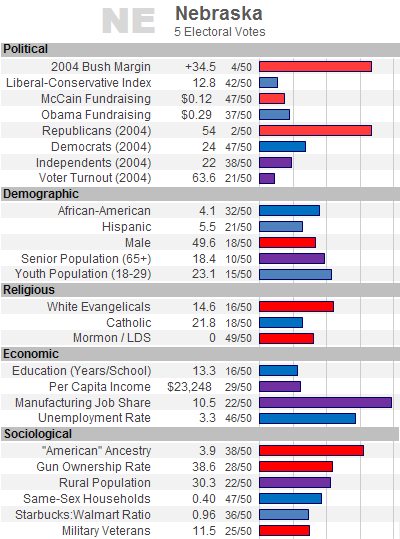 Right now, John McCain looks poised to pick up all five electoral votes, and you’ll know his campaign’s internals are looking a little tight if he starts sending surrogates to the area. McCain starts from the basic fact that no electoral vote has gone for a Democrat since 1964. Bush won by his 4th biggest margin of any state in the union in 2004, and the 2d highest percentage of Republican voters (R 54% to D 24%) was here in the state. Only three states had fewer Democrats. Those are the kind of structural advantages that are simply tough to overcome.

Barack Obama wouldn’t be thinking about Nebraska except for the electoral vote quirk. That, and the fact that Obama got a chance to organize here for the February 9 caucuses has given the campaign an opening to try and steal one EV. While Nebraska as a whole has only 4% African-American voters, many of them are in Omaha. The second congressional district is diverse, with a large blue-collar manufacturing base and many independents. In a state that has no trouble sending Democratic Senators to Washington, Nebraska voters are drawn more to the non-insider candidate, all things being equal. Obama also benefits from two additional factors: (1) the relative compactness of the district, which is basically a bit larger than Douglas County, makes it easier to canvass and organize; and (2) the fact that voting lasts for 37 days here when you count early voting. That helps a better-organized ground effort. 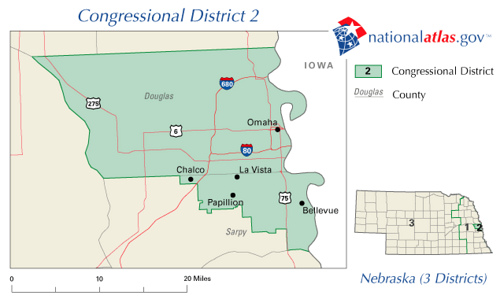 In the presidential race, watch to see how many surrogate or candidate visits these campaigns make. As long as we’re not seeing much movement on that front, we can infer that the internals are telling the campaigns the same thing. In particular, look to see what John McCain’s campaign does, as they are the ones who would need to shore up the vote with a little defense.

In the downballot races, Scott Kleeb is struggling to get name recognition in the more-Democratic areas, after his 2006 run boosted his visibility in the huge rural CD-3. The formula would be win CD-2 by the same as he loses in CD-3, and then win CD-1 (Lincoln and most of the eastern 1/4 of the state) by one vote. Mike Johanns is a relatively popular two-term ex-governor and Bush Agriculture Secretary. He’s also an extremely disciplined candidate who’s been smart enough to take advantage of Kleeb’s low name ID and tack to the left on issues like energy while keeping his pro-life base fired up.

Jim Esch is the young 32-year old Democratic candidate in the Omaha-dominated Nebraska CD-2 challenging Republican incumbent Lee Terry. His own significant ground organization works in parallel with Obama’s large ground game, and indeed Esch has gotten himself on the DCCC Red to Blue list this cycle. Watch this race as a rising-tide-lifts-all-boats prospect.