Tonight we continue our Road to 270 series with the Treasure State, Montana.

THE LAST, BEST PLACE, Montana’s vast blue skies and fierce independent streak make it one of the more fascinating political venues in the nation. A state that spent the 80s and 90s and early part of this decade turning deep red, Montana now has an incredibly popular Democratic governor and two Democratic Senators. Max Baucus’ opponent is an 85-year old who ran against Conrad Burns and Jon Tester as a Green party candidate in 2006. Republicans still have Dennis Rehberg, who has his House seat for likely as long as he wants it. He may challenge Tester for his freshman Senate defense in 2012, but Tester’s popularity and the national landscape at the time will likely determine whether that happens. 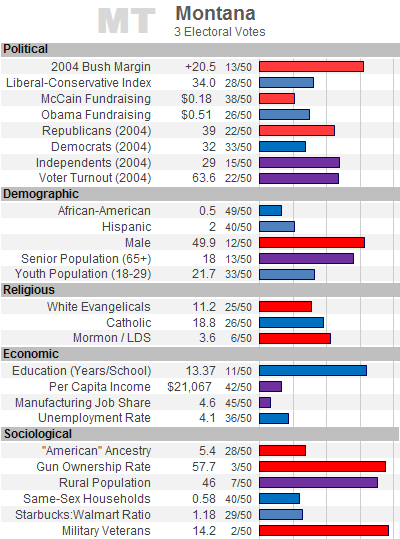 John McCain leads in head-to-head polling in Montana, and the state is generally still a red state, as highly libertarian ex-Perot voters lean Republican when given a choice between two candidates. Only 12 states went by bigger margins for George Bush, who won by over 20 points in 2004. Although there is no partisan voter registration, self-identification pegged Republicans with a 7-pt edge in 2004. More Montanans own guns per capita than all but two states, and only one other state has more military vets by percentage. McCain also has the NRA spending money on direct mail pieces calling Obama the worst candidate ever on gun rights, and Montanans are especially sensitive about their guns. McCain has a fair number of older voters, especially in conservative eastern Montana, as well as a more male-heavy voting population than the median.

Barack Obama has a revitalized Democratic Party and a better base of organization on his side. He also has Ron Paul on the ballot. Montanans vote at high rates and are more educated per capita than citizens of all but ten states. Gas prices in this state that often requires huge drives are a source of deep unease. The Native population is high in Montana, and Obama’s groundwork and outreach has been effective here. Obama has also had an opportunity to visit the state, even late into the spring, as Montana’s primary ended the primary season.

Ron Paul is on the ballot here, and Gov. Brian Schweitzer thinks that Paul will get 5-8 points and cause the Obama-McCain race to be a tossup. We’re a little more skeptical that Paul will pull that many more votes from McCain than Obama, but we see Brian’s point, even if he thinks we (and Jon Tester on MSNBC, apparently) were “nutjobs” for suggesting he might be a strong VP candidate back in early June.

Here’s a fascinating dynamic to watch in Montana as pertains Brian Schweitzer and his future ambition. Having spent a lot of time researching the incredibly weak Republican bench in Montana, I’ll report there’s only one thematic point of concordance: roadblocking Schweitzer. The highly popular Schweitzer will win easy re-election, but what kind of legislature will he have to work with: an obstructive Republican-controlled legislature or one with at least one Democratic-controlled chamber? In the last legislative session, things got so bitter between Schweitzer and the bullying, unhinged Republican caucus led by Mike Lange, Scott Sales, Corey “Negro caucus” Stapleton and John Sinrud (a piece of work who once unsuccessfully tried to bully me into not videotaping a public appropriations hearing he chaired) that the legislature had to call an unprecedented special budget session.

Therefore, a lot hangs in the balance with the statewide races. The House stands at 50R-49D-1 Constitution Party (who caucuses with Rs), and the Senate stands at 26D-24R. In truth, one of Brian’s weaknesses in 2006 was recruiting across-the-board strong candidates to run for state legislature. Montana’s house flipped blue-to-red in 2006, the only state legislative body to flip in that direction during the massive Democratic wave. If Dems face the same troubles this year (which is why the early flirting with the Clinton camp, having her at the top of the ticket in Montana, seemed especially crazy), Schweitzer will have trouble implementing many of his policy ideas, which in turn will leave him with a rougher resume for the future.

Thus, for those inside baseball political junkies who want to know if Schweitzer has national possibilities after his second term ends in 2012 (Energy Secretary, then 2016?), watch the local legislative races in Montana.