Today we continue our Road to 270 series with the Show-Me State, Missouri.

HOME OF FIVETHIRTYEIGHT’S BELOVED ST. LOUIS BLUES HOCKEY CLUB, Missouri and its eleven electoral votes hang in precarious balance. If you look at our chart below, Missouri doesn’t rank in the top ten or bottom ten of any category except for white evangelicals, where it ranks tenth. In 12 of the 26 demographic breakdowns we show, Missouri ranks in the median ten. In 17 of the 26 data points, Missouri ranks in the median twenty. In 25 of 26, the median thirty. Sitting at an Obama projection of 0.1% today, Missouri is truly the median state of the 2008 election, and it could go either way. On election night, either John McCain or Barack Obama are going to have to show this Missouri native who wants it more. 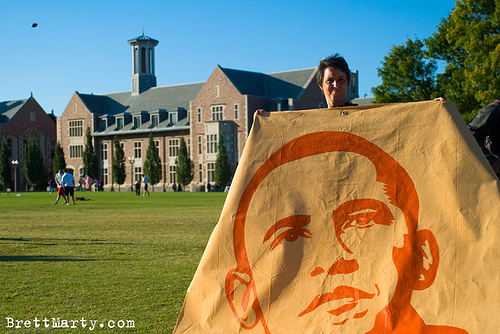 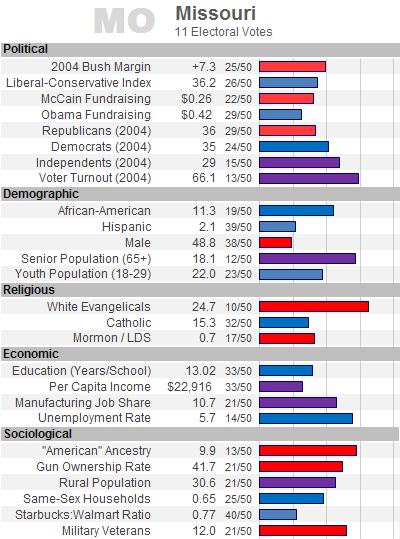 Missouri is a more socially conservative state in the rural areas, and Obama can’t be happy about more Walmarts than Starbucks. A few more than the median own guns, report “American” ancestry, are military vets, are Mormon, aren’t Catholic. And the education rate is slightly below normal, despite half of FiveThirtyEight’s writing staff putting in 12 good public school years in the state. McCain has reason to hope Missouri stays red despite a far worse ground campaign; the Ozark and Bootheel areas are particularly resistant to black candidates in a way they wouldn’t to someone like Claire McCaskill, and Obama hasn’t personally spent as much time in rural Missouri. Still, McCain is in rough shape in St. Louis County, and this native expects Obama to overperform there.

Barack Obama just turned out 100,000 people in St. Louis, and 75,000 in Kansas City, but that doesn’t necessarily translate to votes — Obama brought out large crowds in Pennsylvania during the primary and didn’t win. Missouri is a state with two poles of Democratic support — St. Louis and Kansas City — and a whole lot of red turf in between. The challenge for any Democratic candidate is to hold down the losses in the “Missour-uh” parts of the state and rack it up in the “Missour-ee” areas. Also, keep in mind that Sarah Palin attacked the Blues starting goalie Manny Legace recently, tripping him on her carpet and then devouring his left knee like a crazed wolverine (note: some of this sentence isn’t true). Obama should get a good Legace Bounce.

The presidential race is the biggie, and one House race — the open 9th district seat which incumbent Republican Kenny Hulshof gave up to run for Governor — is a pure tossup. The Governor’s race between Democrat Jay Nixon and Hulshof leans Democratic, and House district 6 in the northwest part of the state between former Democratic K.C. mayor Kay Barnes and incumbent Republican Sam Graves leans Republican. In statewide Missouri races, the St. Louis County suburbs are where races tend to be decided. With a vote percentage of around 19% in that county alone, Barack Obama will have to win by a McCaskill-like margin of around 12 points as well as maximize turnout. John Kerry carried the county by 9 points, but it wasn’t enough. On Super Tuesday primary night, Missouri provided the biggest drama when it NBC called it for Clinton and had to reverse itself and give the state to Obama. On Friday before the election, Missouri is projected for Barack Obama by one-tenth of one percent, the closest state in our current projections. 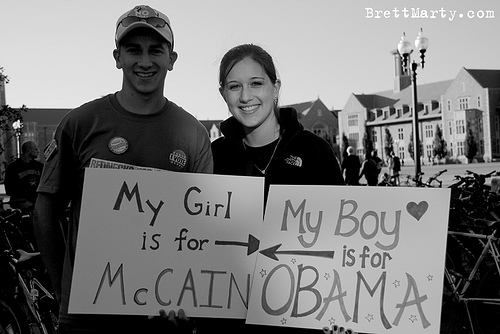