Note: Over the course of the next two months, we will be previewing the Presidential Election matchup in each of the 50 states. The previews are built around a key set of demographic variables in each state. We continue this morning with the Magnolia State, Mississippi.

A POLARIZED STATE OF EXTREMES, Mississippi is a demographic Republican bulwark. More than any other state, it’s impossible to talk about Mississippi without discussing its dark racial history; though it’s the state with the largest number of black voters (who vote Democratic), its white vote is more numerous and almost monolithically Republican. After the Civil War, Mississippi was a reliable Democratic state, even voting for Adlai Stevenson twice over Ike. However, its white citizens were so strongly opposed to allowing blacks privileges of basic citizenship that it went for States’ Rights Party’s Strom Thurmond in 1948, Harry Byrd in 1960 (with Thurmond on the ticket), Barry Goldwater over Civil Rights Act-signing LBJ in 1964 (by 74 points!), and segregationist George Wallace in 1968 (by 40 points). Although the southern and “born-again” Carter narrowly won back the state for Democrats in the Watergate year of 1976, Ronald Reagan launched his campaign in Philadelphia, MS in 1980, a tiny town known only for being the site of three brutal lynchings during the Freedom Rides summer of 1964. Reagan hailed “states’ rights” and sent the message loud and clear that Nixon’s Southern Strategy was to be continued by the Republican Party. Mississippi went Republican in 1980 by a nose and has not been close since.

The poorest state and 2d least educated, Mississippi is a rural gun state with huge numbers of evangelicals and high unemployment. Culturally conservative, its Starbucks:Walmart ratio is the 2d lowest in the nation, and the lowest percentage of same-sex couples live here. Emphasizing its partisan polarization, the fewest number of independents live in Mississippi. Given the clear demographic lines, neither campaign appears likely to seriously contest Mississippi, ceding its six electoral votes to John McCain and the Republican column. To the extent there is action in Mississippi this year, expect it all to come from the Ronnie Musgrove-Roger Wicker Senate race. 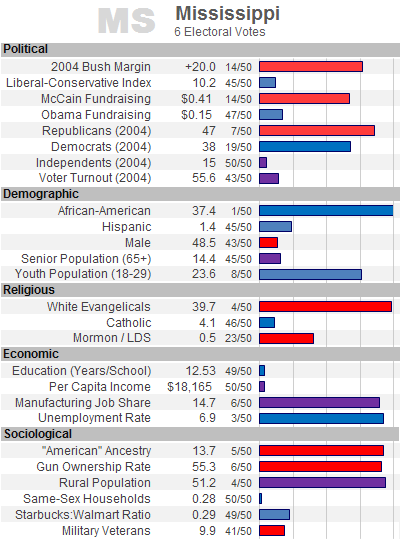 The culturally conservative Deep South. This is safe territory for Republican presidential candidates. Republicans enjoyed a 9-point partisan ID edge in 2004, but given some lingering Democratic affiliation in name only from decades earlier, the true Republican edge is a bit wider. McCain can take heart from the fact that white Democrats went almost unanimously for Hillary Clinton in the primaries, reflecting a discomfort with Obama’s skin color. On the religious front, although evangelicals’ response to McCain has been tepid compared with some other Republicans (and certainly George W. Bush), the Arizona senator enjoys a 61-17 lead nationally over Obama among evangelicals and Mississippi has the 4th highest percentage of evangelicals in the country. Two other demographic factors heavily on McCain’s side are gun ownership (6th highest) and those who answer “American” to the census question on ancestry (5th highest). Both of these factors strongly favor McCain, as the NRA plans to target Obama as the most dangerous presidential nominee for gun rights ever, and because Obama’s mixed ethnicity will surely be a hard pill to swallow for Mississippi’s “Americans.”

Large African-American population. Mississippi has the single highest percentage of African-Americans of any state in the Union at over 37%. Demographically, Mississippi skews younger (8th most voters 18-29), fewer elderly (6th fewest 65+) and female (8th highest percentage). As he did in the primary, Obama seems likely to excite the imaginations of black voters in Mississippi, but if there’s anywhere his candidacy will motivate “anti” voting, it’s probably here. High unemployment favors the change candidate, but it’s likely that overlap with black voters who are Obama’s anyway will negate this impact. Obama can take heart from the May special election results of Congressional District 1, where Democrat Travis Childers surprised most observers by winning the most culturally conservative district in the state (Hillary Clinton even won more delegates than Obama here in the March 11 primary). This result suggests that while Obama may still have a tough time here due to his racial heritage, the enthusiasm gap between the parties this cycle is also present in Mississippi and will impact turnout.

Mississippi is not especially complicated; expect it to be called for McCain the moment the polls close. This is still a largely rural state where there is a white side of town and a black side of town. To win the state, Obama would need to turn out nearly every single black vote, including as of yet unregistered but eligible voters. With the large national voter registration drive underway and an historic candidacy, expect a surge in the African-American vote. If black voters made up something closer to 45% of the state’s population, you’d probably see a lot more competition here; as 95% of that vote and a mere 15% of the white vote would get the job done. But even now, if Obama could capture 95% of the black vote he’d only need a bit over 23% of the white vote to win the state, but 23% of whites in this racially polarized state is likely a bridge too far.

What will be especially interesting this year is one of the two Senate races. Thad Cochran is a heavy favorite to win re-election, but the seat vacated by Trent Lott’s need to beat the calendar under the Obama-sponsored new federal lobbying law should be a close one. Our current projection is a Republican hold by 3.5%, but in the end the racial contours of the top-of-ticket contest should boost turnout for both downballot candidates. As our profile comes before McCain’s VP selection, whether he picks a candidate that excites (e.g., Huckabee) or alienates (e.g., pro-choice Tom Ridge) the white evangelical base may also affect the outcome of the Senate race due to turnout impact. Watch to see if either the DSCC or the Obama campaign put money into voter registration that might capture this Senate seat for the Democrats. Though Mississippi will not be determinative in the presidential race this year, an extra seat in the Democratic Senate majority would be crucial to legislative efforts, particularly if Obama wins.