This afternoon our Road to 270 series continues with the North Star State, Minnesota.

ONCE A DEMOCRATIC GIVEN, Minnesota has tightened up in recent cycles. It’s no longer the same state Mondale won in 1984 against Reagan, his home-state popularity notwithstanding. That said, it’s still an uphill fight for Republicans to take the state, exurban growth aside. John Kerry held off George Bush by 3.5%, and Bush is deeply unpopular in the state. Republicans clearly see the Upper Midwest as the first place to break out of the tight blue-red map of the last few cycles. The St. Paul convention was the equivalent of Democrats planting a flag in Colorado and the Mountain West to expand their base reach.

This year, a highly competitive top-tier Senate race is on tap in the land of 10,000 lakes. Norm Coleman remains a moderate favorite to hang on against comedian-turned-political aspirant Al Franken. In that race, if Franken wins, a lot of credit will go to Obama-generated enthusiasm that drummed up high voter turnout. Considering that Minnesota consistently ranks proudly at the top of the highest voting rate states (almost 77% in 2004!), it’s unclear whether there is room to grow that would provide Franken the coattails he’ll likely need. 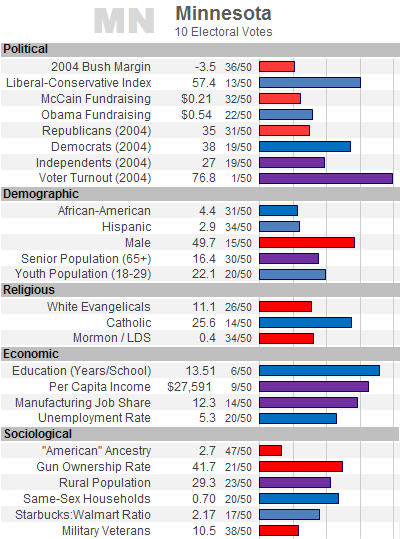 If anything, McCain has the tightening trend in recent cycles going for him as well as a convention that saw the Republican base jolted in the arm by the Palin pick. Looking through our demographic chart, there’s nothing particularly striking about Minnesota aside from voter turnout – it’s within ten spots of the middle in nearly every comparative ranking. The few areas where Minnesota lands on one end or the other tend to favor Obama.

If there is any hidden factor in Minnesota this year, one undercurrent I sensed from attending the St. Paul convention was a potential backlash against the protesters. While many felt outraged about the very heavy-handed police crackdown, the reality is that I talked to a number of local folks, including older Democrats and undecideds, who were angry about the costs to the state incurred by the protests and police effort. It’s all about relatability. The image of a few folks smashing windows and wearing costumes designed to provoke and/or speak out added a few lines of cultural division. That’s not to say the protesters shouldn’t have protested, just reporting a not-all-that controversial result: dramatic protest provokes strong reactions. This is also not to say that protest backlash equals a McCain victory in Minnesota. But if McCain were to win, I’d venture you’d hear a lot of this type of analysis in the post-mortem.

Minnesota’s high education rates favor the Democratic candidate, as does the relatively high liberal score on the Likert scale (which is just over 50%). There are more DFLers (Dems) than Republicans, and Obama’s fundraising indicates an enthusiasm gap. Minnesota ranks just inside the top third on our Starbucks:Walmart scale, and is relatively high in per capita income, a factor that doesn’t track significantly more clearly with one party or another.

Obama has paid attention to Minnesota, both running up a large Super Tuesday victory here in the caucuses and delivering his nomination-clinching speech on June 3d in St. Paul. The other big thing Obama has going for him is that it’s low on the Tipping Point scale, meaning that the McCain camp surely has better and more efficient pickoff targets over the 2004 map (e.g., Michigan, New Hampshire). That means Obama isn’t likely to need to mount any tough defense, even if some polls show a close single-digit race as opposed to the double-digit polling we’ve often seen this cycle out of the state.

Minnesota will likely be a single-digit race at the presidential level when all is said and done, but pay close attention to the Coleman-Franken race. Not only is it a brutal fight already, with each candidate wounded by tough criticism and a torrent of attack ads from each side on the air, but also note that if Franken cannot pull off a victory then Democrats have very little chance of getting to the magical, filibuster-proof 60 seats they hope for.

There’s also a tough fight in MN-01, with freshman Democratic Congressman Tim Walz having pulled off one of the bigger upsets in the 2006 wave year. The biggest House tossup is in Minnesota’s 3d district, where Republican Jim Ramstad is retiring. This is the wealthiest of Minnesota’s House districts in the Hennepin County suburbs of Minneapolis, with Ramstad staffer Erik Paulsen (R) in a “no clear favorite” dogfight with 30-year old Iraq War veteran Ashwin Madia (DFL). Since both Walz’ district and Ramstad’s former district are very narrow +1 R on the Partisan Voter Index scale, the presidential coattails and ground organizing will certainly come into play in these races.