Today we continue our Road to 270 series with the Wolverine Spartan State, Michigan.

How must it feel to be a Democratic voter in Michigan? Shut out of the primaries by the state’s silly decision to play chicken with the DNC (and the Obama campaign’s canny decision to run out the clock on a prospective do-over), Michigan at least appeared to be at the front of the pecking order in the general election, ranking near the top of our tipping point states list throughout the summer. But then, approximately a month ago, the McCain campaign announced that it was pulling out of the state, effectively denying Michigan its voice in the general election. What is it about Michigan that once made it seem like such fertile territory for John McCain — and then made him decide to pull the rug right out from under it? 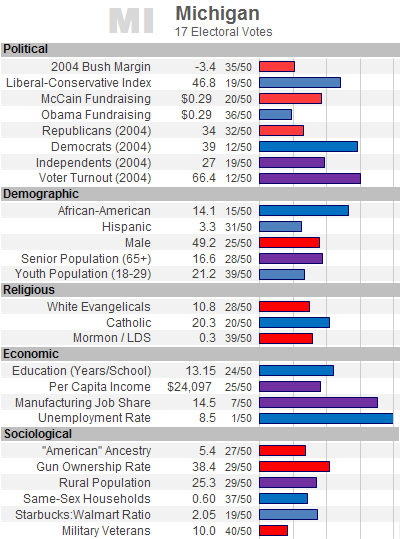 In a September piece for the New Republic, I outlined six factors that made Michigan more favorable to McCain than it ordinarily might be. These factors were as follows:

Looking back upon these variables, at least a couple of them now seem irrelevant. Although Democrats were disappointed by the state’s failure to hold a sanctioned primary, they did not particularly blame Obama for it, as the decision was ultimately the perogative of a Republican-controlled state legislature. Kwame Kilpatrick may have been holding Obama’s numbers down over the summer, but he left office on September 18th, just soon enough to take him out of the headlines for the stretch run of the campaign. While Granholm remains unpopular, Washington’s passage of the bailout bill — coupled with its failure to bail out General Motors — gave Michigan a vehicle to re-direct its anger. Still, this was a state that the Obama campaign was more concerned about than Pennsylvania until virtually the moment that McCain pulled out.

With all of the above said, there are also a multitude of factors that make Michigan fertile territory for Barack Obama. The state has a fairly large African-American population, and two huge university towns in Ann Arbor and East Lansing. Michigan has consistently had the nation’s highest or second-highest unemployment rate. It has a highly unionized electorate in a state where people still take pride in buying American. And it is a state that Democrats are used to winning.

Still, what probably did McCain in is the fact that 98 percent (!) of the state’s eligible population is registered, a reflection of both the state’s longtime status as a battleground and the yeoman efforts of Obama volunteers. I am told that in East Lansing, for instance, the Obama campaign registered more than 10,000 Michigan State University students, roughly the size of that school’s freshman class. In the face of those kinds of numbers, the McCain campaign wasn’t about to win a ground skirmish, and not long after the bailout they bailed.

Various recent polls show leads for Barack Obama ranging from 10 to 22 points. Although this is one state where some veteran operatives were worried about a Bradley Effect, Obama is well outside the range where that could conceivably tip the balance of the state.

Carl Levin will win re-election against Jack Hoogendyk. About the only unknowns are the fate of the Republican incumbents in the state’s 7th and 9th Congressional Districts, but in general the Republicans in Michigan’s congressional delegation are cagey moderates and have held up better than their counterparts in nearby states.

Michigan, indeed, may figure more prominently in the Wednesday Morning Quarterbacking than it does on Tuesday night. If Obama wins both the state and the nation in a blowout, it may be noted for the symbolic coming home of the Reagan Democrats of Macomb County. If Michigan turns out to be closer than anticipated — particularly if it turns out to be closer than Pennsylvania (highly unlikely, but possible) — the McCain campaign’s decision to withdraw from the state will be scrutinized endlessly. Conversely, if McCain pulls out a narrow Electoral College victory, the same decision will be praised.