After a brief convention hiatus, our Road to 270 series continues with the Bay State, Massachusetts.

HIGHLY EDUCATED AND LIBERAL, Massachusetts is easily one of the top-five most reliably Democratic states. Once again, there’ll be no drama here, not even in John Kerry’s Senate re-election bid. As you can see from our demographic chart below, there’s not much of a race projected here, with nearly every variable that favors Obama in the top 10-25% of states, and every variable expected to favor the Republican in the bottom 10-25%.

Our Starbucks-to-Walmart ratio puts Massachusetts just outside the top ten states, but that’s deceptive because Dunkin Donuts is the dominant coffee behemoth and Starbucks are scarcer. Don’t kid yourself, these liberals drink their liberal coffee with the kind of liberal brio that must’ve led Mitt Romney to snap and use “liberal” as a pejorative in his Wednesday night St. Paul speech the way some stumbling speakers use “uh.” Below the liberal chart we’ll have some brief-but-liberal analysis of this straightforward and liberal state. 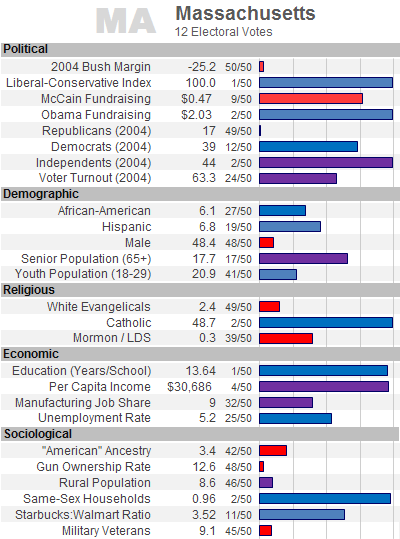 The fact that Massachusetts doesn’t have 270 electoral votes is a big plus for McCain. It’s only 12. The fact that Obama’s not from Massachusetts (as were Kerry and Dukakis) means Republicans aren’t bashing the state as hard as they sometimes do (“Taxachusetts,” “Massachusetts liberal,” etc.). McCain is well-liked in neighboring New Hampshire, and the Boston Globe endorsed him during the Republican primary. And the state’s voters did decide to elect Mitt Romney twice. McCain is also the type of Republican who – in his 2000 incarnation – might have played well here. In 2000, he might have even lost by single digits to Al Gore. Unfortunately, the Palin pick is too socially conservative for this state and McCain is no longer that 2000 guy. In an alternate universe where McCain were to make a play for Massachusetts, he might try and tie Obama to his friend, Governor Deval Patrick, as someone who speaks well but doesn’t deliver – Patrick’s unfavorability rating is high.

Home of Obama’s Harvard Law pedigree, pretty much every demographic breakdown strongly favors the Democratic candidate. It���s the most liberal state on the Likert scale. It’s the most educated state. Sociologically, it’s highly urban, has few military veterans but the second-most same-sex households per capita and ranks 48 of 50 on the gun ownership scale. In religious categories, it’s the 2d-most Catholic state but 49th-most white evangelical state. Demographically it’s got the 3d-highest female voting percentage, and has a huge Democratic-to-Republican disparity, with Republicans reporting at the 2d lowest rate. Obama fundraising per capita is through the roof, at over $2 per citizen. The 2004 Massachusetts bashing and home-state edge led to Kerry’s biggest win. It might not be Obama’s biggest margin in 2008 – he did not carry the primary here despite the backing of both Democratic Senatorial deans – but to suggest this means Obama will struggle to win the state would be analytic malpractice.

With Tom Brady done for the year, will the Patriots fall apart, or can Matt Cassel step in and do the job? Can the Celtics repeat? What about the Red Sox? Oh… Obama vs. McCain. Let’s not let ourselves be fooled. Probably the best thing to watch in Massachusetts this presidential year is the Boston Globe’s coverage of the New Hampshire race.