Today we continue our Road to 270 series with the Old Line State, Maryland.

CHESAPEAKE BLUE, Maryland and its ten electoral votes are among Barack Obama’s safest. This is one of the most liberal states in the nation, with every statewide office Democratic-held and both state legislatures holding Democratic super-majorities. Six of eight House seats are Democratic, with only the 1st and 6th CDs held by Republicans. After a series of four single digit elections (Carter ’76, Carter ’80, Reagan ’84, and Bush ’88), Maryland has broken Democratic by double digits each of the last four elections beginning with Bill Clinton. 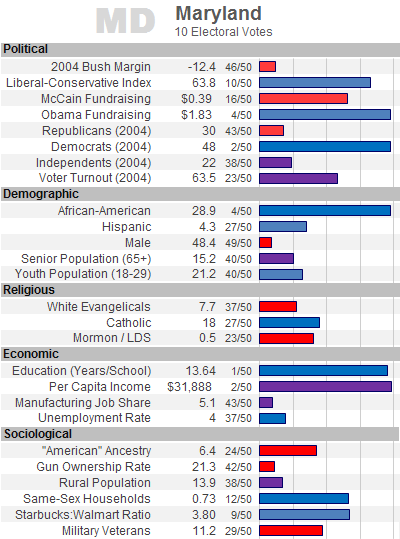 Honestly, not much. Unemployment is relatively low, the youth population ranks on the lower end of states, and McCain’s Maryland fundraising ranks it in the top third of states. In the Appalachian areas of Maryland, the “American” ancestry responses start getting high, but there isn’t anywhere near enough population there to compensate for the huge Democratic margins in the BWI corridor. Only four states went for John Kerry by bigger margins, and unfortunately for John McCain it’ll be just as tough for him in this blue mid-Atlantic enclave.

Barack Obama has extremely high per capita fundraising in the state, given the number of DC-proximal residents. It’s also the 4th highest percentage of African-American vote, the 2d highest percentage of female vote, and the single most-educated state (good job hitting the books, Maryland). It ranks 10th most liberal on the Likert scale, and has the 2d most self-identifying Democrats. Same-sex households by percentage rank in the upper quartile, and there are many more Starbucks than Walmarts. The high education rates lead Maryland to be the 2d highest per capita income state, which doesn’t directly correlate with Democratic voting. Obama’s favorite TV series, the legendary show The Wire, was set in Maryland. Ah, McNulty, Omar and Stringer Bell, wherefore art thou?

With no statewide races and the presidential race not dramatic this year, the race to watch is Maryland’s 1st district, the Eastern Shore/Baltimore suburban open seat held by Wayne Gilchrest until the Club for Growth primaried him. That primary, against eventual winner Andrew Harris, was so bitter that Gilchrest actually endorsed Frank Kravotil, the Democratic challenger. Gilchrest is not a happy camper, and the race is considered anywhere from lean Republican to toss-up.

Not a big Andrew Harris fan, is Gilchrest. Every other House seat in Maryland (six Dems, one Rep) is considered safe.

Here’s another fun one from last night in Marietta, Ohio: 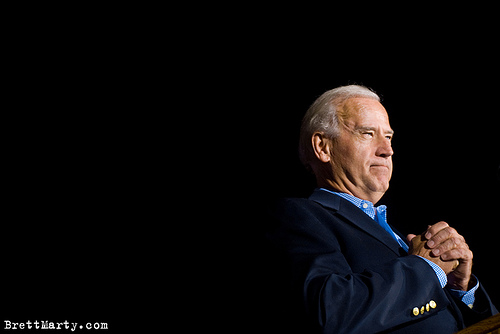