Note: Over the course of the next two months, we will be previewing the Presidential Election matchup in each of the 50 states. The previews are built around a key set of demographic variables in each state. We continue this morning with the Pine Tree State, Maine.

FIERCELY INDEPENDENT, Maine is an ironic state to follow our Mississippi preview, if only because each state was once a cornerstone of the other party’s electoral column. While Mississippi was formerly part of a solid Democratic South in the pre-Civil Rights Act era and is now solidly Republican, Maine spent most of the 20th century as a pillar of Rockefeller-style rock-ribbed Republicanism but has voted Democratic in presidential elections four straight times. Between 1916 and 1988, Maine voted only twice for Democrats – the LBJ landslide in 1964 and with home-stater Edmund Muskie on the Democratic ticket in 1968. Not even FDR’s broad popularity could penetrate Maine’s Republican bent, which went all four times for the Republican candidate.

Even as the state moves toward regular support for Democrats in presidential elections with the rest of New England, it retains two generally popular Republican Senators who seem to be immune from the regional wave of anti-Republican sentiment that claimed Rhode Island’s Lincoln Chafee in 2006.

Along with Nebraska, Maine is one of two states to divide its electoral votes proportionally, with the winner of each congressional district getting one EV and the statewide winner getting two. The more conservative of Maine’s two districts is CD-02, encompassing most of Maine outside of Portland and Augusta, including most of the places where people die in Stephen King novels. In 2008, most polling shows Barack Obama comfortably ahead and it’s fair to say that if John McCain is winning any electoral votes here, he’s probably got the election well in hand. 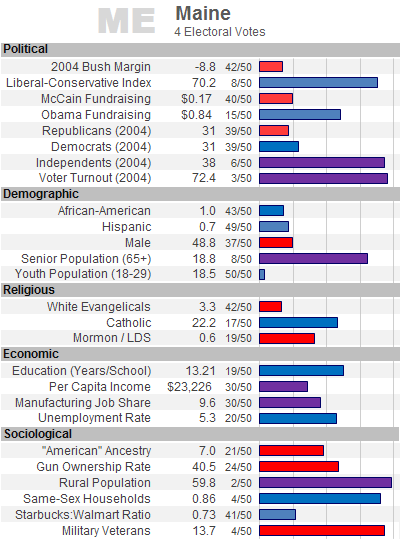 When it votes Republican, Maine has appreciated its “mavericks.” Thus, the John McCain of 2000 would have had a strong shot here. Maine’s tendency toward anti-establishment candidates was recently reflected in the election of independent two-term governor Angus King, Jr. If McCain had not had to work so hard wooing the culturally conservative Republican base to win his party’s nomination this time around, and had George W. Bush not so badly hurt the Republican brand in general, McCain’s earlier reputation for willingness to buck his party would have played well in the state. In addition to its independent streak, a high percentage of military veterans helps McCain here, and the fact that Maine has the fewest percentage of 18-29 year olds as a segment of voting population also helps.

The fact that Maine has turned into a fairly liberal state compared with the rest of the nation and has high turnout in general elections does most of Obama’s work for him. The 5-1 disparity in fundraising and roughly the same in field offices foreshadows an enthusiasm gap in Obama’s favor. While some may be tempted to see Maine’s very old and white population as a potential inhibitor of success, this is a more socially liberal state that ranks 4th nationally in same-sex households as well as ranks low on the list of white evangelicals at 3.3%. David Sirota’s discussion of the Race Chasm effect during the Democratic primaries is worth a read, and points out that Obama did well in states versus Hillary Clinton where either a very small or very large percentage of the Democratic electorate was African-American. In Maine, Obama won by nearly 20 points. Lack of racial polarization in states where blacks make up such a small percentage of voters should ironically help Obama in a state like Maine.

As with Mississippi, there shouldn’t be a lot of drama unfolding in Maine. If Democrats are able to capture a 60th Senate seat it may well come here. Watch to see if Obama puts significant field resources into the race to help Rep. Tom Allen in his race against incumbent Sen. Susan Collins. Allen didn’t exactly race to embrace Obama during the primary contest, but governing with as close to a filibuster-proof majority as possible might tempt the folks in Chicago to make a substantial investment in helping Allen beyond the six or so field offices open now. Of course, with it still unclear how Obama’s Campaign for Change will interact with downballot field programs, we’ll have to wait and see whether Allen’s will mostly be a standard DSCC-funded coordinated campaign. If you see Obama making visits to the state and putting in significant field resources in Maine, take it as a sign of confidence (or cockiness, as you prefer) that Obama expects to win and wants to run up his majority in the Senate.