Today we continue our Road to 270 series with the Pelican State, Louisiana.

CAJUN BAYOU TABASCO RED, Louisiana appears this year to be on pace to break its streak of supporting every presidential winner since 1972. Since 2004, Huey Long’s home state has been ravaged by hurricane damage and lost a significant segment of its population. It’s also seen political scandals and widespread graft in the FEMA rebuilding effort, so the relationship with politics may be a little skewed and hard to be certain of how the effect will play in Louisiana, land of Avery Island red gold. 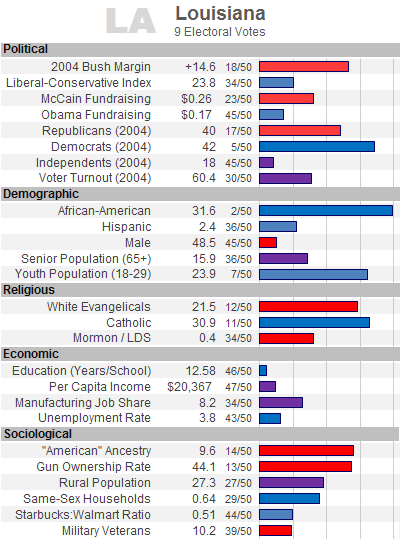 In Louisiana, site of his infamous June 3 Lime Green Speech, John McCain actually led Barack Obama in fundraising, and the white evangelical vote is strong here, as is customary in Southern states. Louisiana ranks in the top third of gun-owning and “American” ancestry states and factors that would ordinarily favor Obama — high unemployment, high education, or even the vaunted Starbucks:Walmart ratio — are all lagging near the bottom in Louisiana. The state ranks on the conservative end of the Likert scale, and indeed voted for George Bush twice, the second time by double digits. McCain should continue the Republican trend in the state by taking its 9 electoral votes.

Louisiana has the 2d highest percentage of African-American voters, and a high percentage of female voters. However, Louisiana lost a significant number of black voters after Katrina forced relocation, and this small but significant shift in demographics doesn’t help Obama. Registered Democrats outnumbered registered Republicans in 2004, and in fact Dem registration was the 5th highest of any state in the nation. Louisiana has the 7th highest percentage of voters under 30. The Catholic vote is high and there aren’t as many military vets, a factor that would tend to favor John McCain if it were higher. Obama organized here in the primary, which gave his campaign a head start.

John McCain has been over 50 in nearly every public poll conducted in Louisiana, and though our projection for the state keeps getting closer, Barack Obama will only win the state if he gets into the 400 EV territory. Originally, Mary Landrieu’s Senate seat was seen as the most vulnerable Democratic Senate seat, but it’s clear she will cruise to re-election and Republicans will not add seats. The guy with the hookers isn’t up for Senate re-election until 2010. But William “Cash Bricks” Jefferson is, and will likely continue to be an embarrassment for Democrats.

In Louisiana’s 6th district, Don Cazayoux will try to hold on to the seat he won in the spring during one of those portentous special elections Democrats swept in deep red districts. Despite guilt-by-association-by-association attempts (Cazayoux-Obama-Wright), voters rejected the negative campaign and Cazayoux won by less than 3%. Will he win again in a regular election?

This has nothing to do with Louisiana, but Brett loves his teasers: 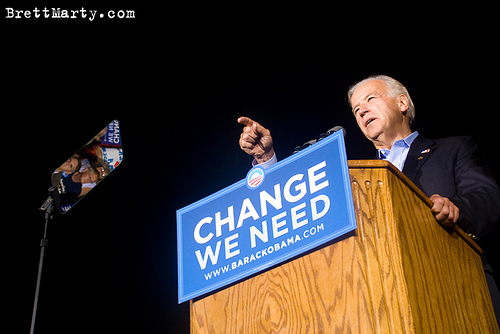