Today we continue our Road to 270 series with the Bluegrass State, Kentucky.

FROM PADUCAH TO THE MOONSHINE HILLS, Kentucky is home to over 20% of voters who describe their ancestry as “American,” placing it number one on the list. With low per capita income and even lower education levels, Kentucky’s very high Democratic partisan self-identification is betrayed by George W. Bush’s 20-point win in 2004. 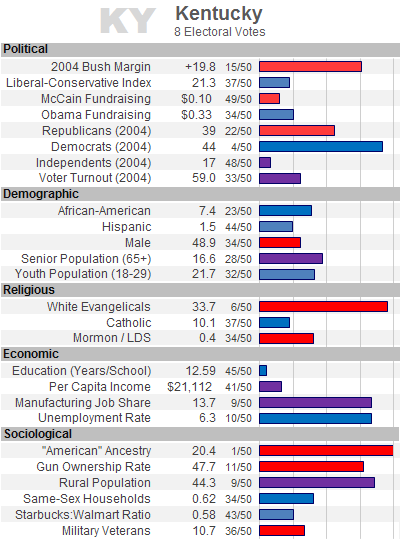 Kentucky voters own a lot of guns, go to more Walmarts than Starbucks, and only five states contain proportionally more white evangelicals. Partisan ID-wise, Kentucky voters prefer the Democratic party, but the state’s social conservatism leads to Republican preference at the presidential level. Low education levels favor the Republican candidate, and the relative paucity of same-sex households, Latino voters, voters under 30, or Catholics don’t add to Obama’s cause. Unless John McCain is treading in the low 100s of electoral vote category, he’ll win the state of Kentucky.

As noted at the outset, Barack Obama’s advantage in partisan self-identification is deceptive. Particularly in rural areas and Eastern Kentucky, Obama was wiped off the map. Obama failed to win a single Democratic convention delegate in Kentucky’s 5th district, the only district in the entire nation where that happened. One thing Obama does have going for him in Kentucky is the state is on the tougher end of economic times, ranking 10th in unemployment rate. As the economic crisis has helped tilt the race in Obama’s favor, Kentucky would seem a place where Obama might close ground, even if it’s not enough to win.

The most interesting race to watch in Kentucky is Senate Republican Majority Leader Mitch McConnell’s re-election defense against Democrat Bruce Lunsford. We project the race as of this morning at McConnell +3.6%, but that is too close for comfort in a year where the enthusiasm gap between Democratic and Republican voters suggests a potential wave. The other race to look for is who wins the open House seat in KY-02, which Republicans believe could be vulnerable in a wave year. Cook Political Report’s David Wasserman ranks the race as Lean Republican, and with a partisan voting index (PVI) of +13, it’s easy to see why. Two state senators, Democrat David Boswell and Republican Brett Guthrie, are vying for the open seat. John Yarmuth, who won a close race in 2006 to unseat Anne Northup and faces her again in KY-03, enjoys the Colbert Bump and has Republicans writing off the race.