Tonight we continue our Road to 270 series with the Sunflower State, Kansas.

WHAT’S THE MATTER WITH Kansas? If you’re a Republican, nothing. If you’re a Democrat, you look at the only four items that Kansas ranks in the top or bottom ten of states in our data: (1) high Bush 2004 margin; (2) high (50%) self-identifying Republicans; (3) low Obama fundraising; and (4) low Democratic self-identification. Despite some splitting in Republican Party ranks between moderates and strong conservatives that allowed Kathleen Sebelius to get elected twice, those numbers tell the story in a nutshell. 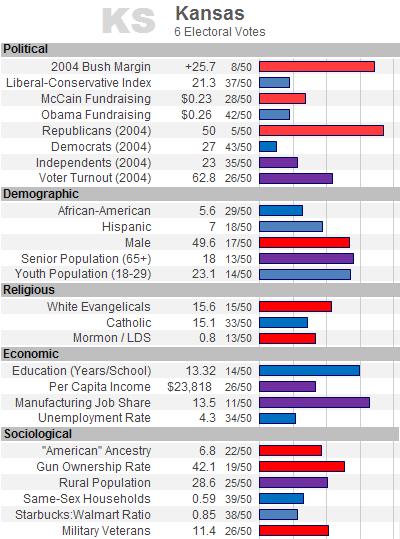 Although Kansas doesn’t feature many dramatics in the statistical rankings relative to other states, by and large most of the categories shade toward the Republican. Sociologically, Kansas owns a little more guns and is a little less hospitable for same-sex couples as well as has more Walmarts. On the religious scale, Kansas has more white evangelicals than most states, but fewer Catholics and more Mormons, which trend toward Republican historical voting patterns. Unemployment is relatively low, it’s more male, has a high number of elderly voters, and McCain’s fundraising almost equaled Obama’s here.

Barack Obama has roots in Kansas, and its popular Governor, Kathleen Sebelius, is one of Obama’s staunchest surrogates. Education rates are relatively high in Kansas, and aside from the structurally crippling partisan self-identification imbalance, not much appears in the numbers to denote Kansas as a state that should automatically go Republican. Similar to Nebraska in its congressional seat geography, Kansas features an older, western 3/4 of the state that comprises two very red House districts. But in the eastern quarter of the state, like Nebraska, Democrats have a competitive shot. Barack Obama won’t win Kansas, but it will not be his worst state by any stretch.

Kansas is safe for McCain and none of the statewide races occur until 2010, so all the action is in the House, where Nancy Boyda’s freshman defense occurs in KS-02. Danny Manning and the Miracles took the title in 1988, and Nancy Bodya and the Miracles led the way for upset victories in 2006. Boyda will probably win re-election in this equally strong wave climate, but it’s the closest race Kansans (Hoosiers?) have to offer. Otherwise watch Kansas try to stay good in college football; it’s really cute.