Today our Road to 270 series continues with the Hawkeye State, Iowa.

A FIELD OF DREAMS and a classic Midwest battleground, Iowa is not easily categorizable in our demographic data. It’s also a state that tends to know presidential candidates very well due to its critical early caucus, though not always. Bill Clinton essentially skipped the state in 1992 because home-stater Tom Harkin (up for a shoo-in Senate re-election this year) was sure to win it. Perhaps because candidates tend to work the state so hard, or perhaps because Iowans take extra pride in their civic responsibilities, the state ranks high in voter turnout.

Other than its very high senior population, with nearly 20% over 65 years old, and its high share of manufacturing jobs, Iowa sits squarely in the median of most American states on most other categories we track. In religious categories, for example, it has a nearly median white evangelical vote, a median Catholic vote share, and a median Mormon/LDS share. Education, “American” ancestry, and the Likert score for liberal-conservative rating sits squarely in the median as well. Iowa is a classic battleground. 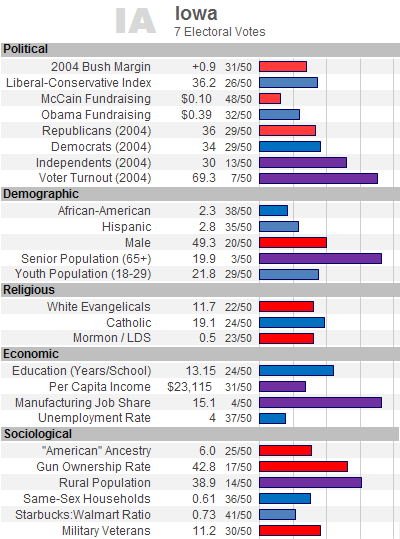 John McCain can be happy that Iowa, which gave its Democratic caucus vote in 2004 to John Kerry, went on to prefer George Bush by less than 1%. Bush won Iowa’s seven electoral votes. However, McCain didn’t fare well in the Iowa caucus, finishing a distant third behind Mike Huckabee and Mitt Romney with 13% of the vote. His politically gutsy opposition to corn ethanol didn’t win him many admirers in Iowa, and this is probably one reason McCain is struggling to stay in contention here for the general election. It’s likely a huge factor in McCain’s terrible per capita fundraising numbers here (3d worst).

On the other hand, it’s likely the pick of Sarah Palin has helped McCain consolidate his Republican base here. Since Mike Huckabee’s religious conservatism played well enough for him to beat Romney’s massive money operation, we know that Iowa Republicans are, in their base, the type of voters who we’ve seen drawn to Palin’s candidacy. Still, McCain has an uphill climb in Iowa.

Barack Obama has a huge head start in Iowa for the general election based on the long retail politics campaign he ran during the caucus season. Voters know him in the state. The grassroots volunteer organizations simply came over intact for the general election and were up and running full bore from the getgo. McCain has had to build his from scratch.

As has been widely discussed, this is one of those states where Obama may have a reverse Bradley effect going on, if such an effect still exists. Nate projects that 56.9% of undecideds in Iowa will break for Obama.

Recent polling of the state point to Iowa being the Democratic Party’s safest pickup from 2004, as multiple polls show Barack Obama with double digit leads. Five Thirty Eight currently projects Obama outside the Penumbra Zone here, at 10.5%, though as a red state in 2004 it can’t be taken for granted. We’ll somehow be there tomorrow night and Thursday morning, and we’ll check whether McCain is seriously contending the state, or has pulled his resources out.

The first thing to watch for is if and when McCain essentially concedes the state. It seems at this point that he’s more likely to pick off Minnesota than hold Iowa. Barack Obama is not taking Iowa for granted, as Kerry States + Iowa is usually the starting point for plotting out a winning Democratic map. If you see either candidate scheduling visits this late in the campaign, it indicates their internal polling is telling them the state may be in play. If not, it’s a tell that both know which way the 7 EVs will blow.

Another thing to look for in Iowa is the House races. In the rising-tide-lifts-all-boats sense, if 2008 is another downballot wave year, look for the longshot 4th and 5th CDs. Iowa Dems pulled off one of their most stunning upsets at the House level in 2006 when Dave Loebsack picked off moderate Republican (and Denver convention speaker) incumbent Rep. Jim Leach. The governor’s seat is next up in 2010.

Note: please excuse our delay in this series, and strap in for a day-by-day sprint to the finish.