Note: Over the course of the next two months, we will be previewing the Presidential Election matchup in each of the 50 states. The previews are built around a key set of demographic variables in each state. We begin this morning with the Hoosier State, Indiana.

PERHAPS NO STATE better embodies the difference in philosophy between the McCain and Obama campaigns than Indiana. For Obama, it represents a chance to rewrite the conventional wisdom and redraw the map: Indiana has gone Democratic just once in the past 15 elections, but Obama is serious about winning it, with intentions of opening as many as 30 field offices in the state. McCain, meanwhile, is acting as though he is calling a bluff; his campaign has not been advertising there, nor has it devoted any resources to the ground game. What gives each campaign such confidence about their prospects? 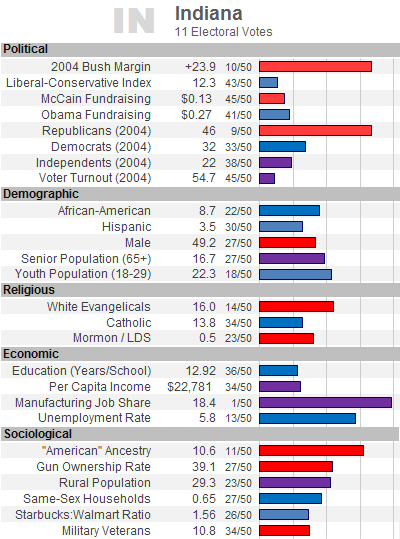 Note: Factors colored in red can generally be thought to help McCain. Factors in blue can generally be thought to help Obama. Factors in purple have ambiguous effects. Except where otherwise apprent, the numbers next to each variable represent the proportion out of each 100 residents in each state who fall into that category. Fundraising numbers reflect dollars raised in the 2008 campaign cycle per eligible voter in each state. Figures for seniors and youth voters are proportions of all residents aged 18+, rather than all residents of any age. The figure for education reflects the average number of years of completed schooling for all adults aged 25+. The figure for same-sex households reflects the number of same-sex partner households as a proportion of all households in the state. The liberal-conservative index is scaled from 0 (conservative) to 100 (liberal), based on a Likert score of voter self-identification in 2004 exit polls. The turnout rates reflect eligible voters only. Unemployment rates are current as of June 2008.

History. Not only has Indiana voted Democratic just once since World War II, but it has also voted more Republican than the nation as a whole in each of those elections. Indiana voters are moderate on pocketbook issues, but conservatives on cultural ones, and as of 2004, the Republicans had a 14-point advantage in party identification. Indiana has a Republican governor who will probably win re-election, and Republicans control 33 of Indiana’s 50 seats in the State Senate. Indiana also has one of the nation’s toughest voter ID laws, which has been upheld in the face of court challenges. In addition, its polls close early, by 6 PM local time, which tends to limit participation, especially among shift workers. Indiana is among the top states in the country in vehicle miles per capita, so issues like the gas tax could prove to be an effective wedge.

A lot of little things, which might add up to a big thing. Indiana has the most manufacturing-intensive economy in the country, with 18 percent of its jobs in the sector; Illinois-based unions are used to working its territory. Approximately 20-25 percent of the state is in the Chicago media market, and Obama overperford in the Northern portion of the state during the Democratic primaries. Indiana has several major colleges and universities, and an above-average number of young voters. Obama has outfundraised McCain in Indiana better than 2:1. The Bayh brand name remains extremely powerful in the state, and Evan Bayh can be an effective surrogate, whether or not he is Obama’s vice president. Obama has a head start, having focused intensely on the state during the primaries, and essentially keeping his organization intact since then.

Democrats have not made a serious effort to compete in Indiana since at least 1988, when Dan Quayle was George Bush’s VP nominee and effective cordoned the state off to Michael Dukakis. And since the state has usually held a late primary, it had not gotten much attention during the nomination process.

The essential question then is whether there has been some sort of latent Democratic vote in Indiana that the Democrats simply haven’t bothered to fight for. Indiana has generally had one of the lowest turnout rates in the country, which might be a consequence of its early poll closing times, but might also reflect the apathy caused by the lack of attention paid to it. That alone might not be enough to make the state competitive. But when coupled with the fact that the Democratic nominee is a Midwesterner from a neighboring state, that the state’s blue-collar economy is really struggling, and that one campaign is invested in the state when the other isn’t, you might have the right mix of circumstances necessary to tip the state.

Geographically, Obama will need to carry Marion County (Indianapolis) — which John Kerry won by just 2 points — by perhaps as many as 25-30. He will have to do even better than that in the Northwest suburbs. And he will have to hold his own in the Northeast portion of the state — losing by not more than 5 or 10 points — while keeping Southern Indiana to within 20. If he is able to accomplish substantially all of those things, the math will be there for him.