Today we continue our Road to 270 series with the Land of Lincoln, Illinois, which is apparently the state that Chicago is located in. 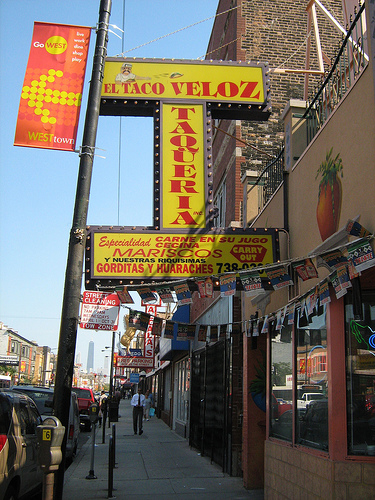 Once upon a time, Illinois was the swingiest state in all the land. Its electoral votes were critical in clinching an electoral victory for John F. Kennedy in 1960, and in each election from 1948 through 1988, it ran within 6 points of the national popular vote — the only state in the country to do so.

Nowadays, however, save for the large footprint of the Obama campaign, Illinois — and particularly Chicago — is perhaps among the least interesting places to be a voter in the entire country. The Democrat wins comfortably in races for President and the state’s two Senate seats, while the Republican brand is so damaged in Illinois that corrupt, scandal-prone Governor Rod Blagojevich — who is now trying to fend off periodic attempts to recall him — won re-election against a relatively compelling Republican opponent in Judy Baar Topinka by 10 points in 2006. 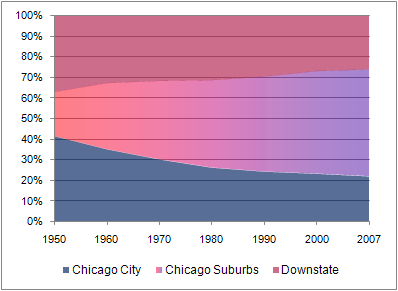 If the suburban Chicago vote is split roughly evenly between the two parties, then two things are guaranteed to happen. One, it will be a hotbed for Congressional races, as it is again this year. But two, it allows the Chicago city vote to swamp the downstate, rural vote. The city proper has no more people than downstate — actually, slightly fewer — but when it goes for the Democrat by 50 or 60 points, and downstate goes for the Republican by 15 or 25 points, that gives the Democrat an insurmountable advantage. 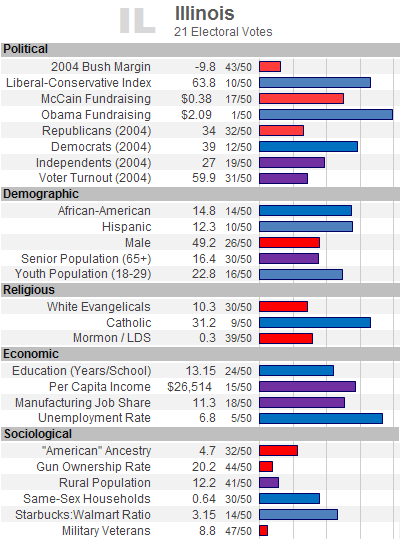 Very, very little, although he’ll probably carry a dozen or perhaps a couple dozen downstate counties. When we ran Illinois through our similarity score matrix, one of the first states that came up was California. The comparison seems counterintuitive at first, but each state contains a similar mash-up of demographics, of city, suburb, sprawl, and farmlands, and the two states have voted with one another every year since 1964. Imagine California, throw in a home-field advantage for the Democrat, and you can understand how much McCain is going to get crushed. Even if Obama were not from Illinois, the state would still not be a good fit for McCain’s temperament, as we tend to prefer cool-headed pragmatism to hot-tempered idealism. The only thing that may hold Obama’s margins back is that half of Chicago may be volunteering in Indiana or Wisconsin on Election Day.

Well, he’s from here, and hasn’t been around long enough to make enemies (although I’ll be curious to see who Alice Palmer votes for). Illinois has among the largest black populations outside the South, and a rapidly-growing Hispanic population, although much of the latter is unregistered. It’s also a relatively young state, as Chicago serves as a magnet for twentysomething professionals throughout the Midwest region.

Jubilation if and when Obama wins the Presidency, culminating in a rally in Chicago’s Grant Park that may draw one million souls. It’s not a Cubs’ World Championship, but most Illinoisans will take it; what kind of odds could you have gotten in 1908 that a black dude would get elected president before the Cubs won the Series again?

There will be a bit of action to watch after Election Day, when should Obama win, Governor Blagojevich will have to appoint his replacement in the Senate. Jesse Jackson Jr., who represents the Second Congressional District, is reportedly the odds-on favorite, but Blago faces something of a dilemma here: the Jackson name is a liability in a statewide race, and what might otherwise be a safe Democratic seat could become a battleground in 2010, certainly in the general election and possibly also in the primaries. In the long run, this seat probably belongs to Lisa Madigan if she wants it, although she and Blagojevich hate one another’s guts, and she may have her designs on the Governor’s Mansion instead.