Today we continue our Road to 270 series with the Gem State, Idaho.

HOME OF NAPOLEON DYNAMITE and the spectacular Salmon River, Idaho is one of John McCain’s safest states in 2008, with a double digit win expected. Republican through and through, Idaho boasts a roughly three-to-one edge in the state legislature. Both Senators and both House members are Republican, as is every statewide officeholder. The physically stunning state is Republican officeholding Heaven. 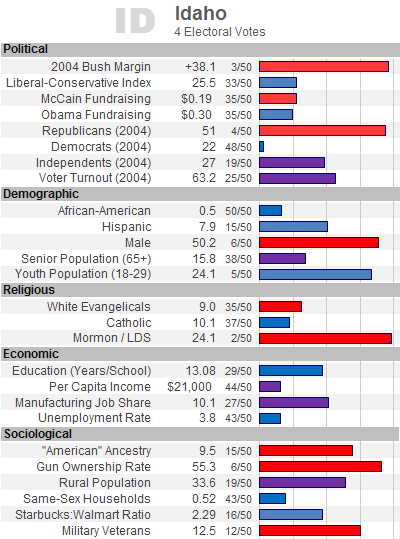 Only two states went more strongly for George Bush than Idaho, and self-identifying Republicans outnumber their Democratic counterparts by more than 2-to-1. More than 50% of voters are male, and the 2d most Mormon voters by percentage live in Idaho. Unemployment is low, there are fewer black voters than anywhere else in the nation, and Idaho is one of the more conservative states on the Likert scale. In sociological categories, Idaho strongly goes McCain’s way, with very high gun ownership, reasonably high “American” ancestry, low proportion of same-sex households, and strong military veteran constituency. John McCain will win Idaho.

Barack Obama has to be pretty pleased with that Starbucks:Walmart ratio, if for no other reason than every other sociological category runs in John McCain’s favor. Idaho boasts a high percentage of voters under 30, and not as many elderly voters. Obama also famously paid attention to Idaho in the primary season, eschewing campaign time in California (one and a half days) in order to visit Boise. So he can expect to overperform the Democratic presidential norm in Idaho, though it won’t be enough to win.

The race in Idaho’s 1st House district between Walt Minnick (D) and incumbent Bill Sali (R) is the race to watch. David Wasserman at the Cook Political Report rates the race lean Republican, but it is the closest political contest this year in Idaho, with Larry LaRocco’s challenge to Lt. Gov. Jim Risch for Larry Craig’s open Senate seat looking like a distant hope two weeks before the election. Idaho is not yet following the path of neighboring Montana in terms of purpling; it’s still a red state. Dems are making organizing inroads in hopes of long-term improvement, but we have yet to see much drama develop in Idaho.