Note: Over the course of the next two months, we will be previewing the Presidential Election matchup in each of the 50 states. The previews are built around a key set of demographic variables in each state. We continue this week with the Aloha State, Hawaii.

EXOTIC AND FOREIGN (see: Roberts, Cokie), Hawaii is a solid Democratic base state, having gone Republican only twice since it first voted in Presidential elections in 1960 – the landslide years of 1972 and 1984. Hawaii is one of four majority-minority states in the union, and it is a blended state, with children of mixed ethnic heritage more the norm than anywhere else. That bodes well for Obama, whose own mixed ethnicity represents a breakthrough candidacy that many Hawaiians are sure to see as a reflection of their own backgrounds. While its governor is Republican, each of Hawaii’s federal representatives are Democratic. 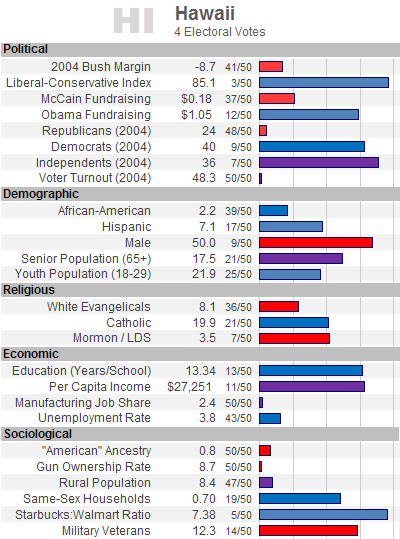 Unfortunately for him, very little hope in the demographic variables, as nearly every one is neutral, slightly unfavorable or heavily cuts against him. Hawaii is in the upper third of states with military veterans, and in the top fifth most male states. And Hawaiians vote at the most lethargic rate in the nation, though it is not clear that this helps either candidate. To the extent McCain pushes a subtextual theme against Obama that he is not fully American or patriotic, those efforts will backfire in Hawaii, a state that considers itself proudly American.

In addition to Obama having spent much of his youth here, nearly every demographic variable helps the Democrat – 3d most liberal state, 3d least percentage of registered Republicans, 9th highest percentage of registered Democrats, lowest gun ownership rate, lowest reporting of “American” ancestry, 4th most urban, and a top-10% Starbucks:Walmart ratio all point to fertile ground for Obama. Obama has family in Hawaii as surrogates, and given its distance from the mainland, it’s both difficult and an inefficient use of resources for Republicans to seriously mount an effort here. The fact that Obama spent a week here inside of 100 days to the election (even if mostly vacation time) can only boost excitement for him in a state used to being ignored when it comes to presidential politics.

There isn’t much to watch in Hawaii in terms of ultimate outcome, and we shouldn’t make this more complicated than it is. It’s the Democrats’ version of Utah this year. Currently we project a large double-digit win for Obama, with only Vermont, Rhode Island and DC to post wider margins of victory. It will be interesting to see if voter turnout in Hawaii upticks significantly with a native son on the ticket, but don’t expect to see a repeat of the last-minute “Maui? Wowie!” Scenario that we saw in 2004 with Dick Cheney’s visit on the eve of the election.