Today we continue our Road to 270 series with the Peach State, Georgia.

ALWAYS ON OUR MIND, Georgia might be the Election Night shocker on two counts — Presidential and Senatorial. There’s always a shocker, and this would be the On the Road crew’s nominee. FiveThirtyEight pulls into Atlanta early tomorrow. Bill Clinton won the state for Democrats in 1992 by 1%, and lost by the same margin four years later. Since native son Jimmy Carter was on the ballot, Democrats have found Georgia tough sledding. But with African-American turnout soaring to unprecedented levels, Georgia may be a state where the public polling models are off, and indeed Barack Obama has put last minute advertising resources into the state in an effort to both go over 400 electoral votes as well as help a rising tide lift Jim Martin’s boat against Max Cleland-smearing incumbent Saxby Chambliss. 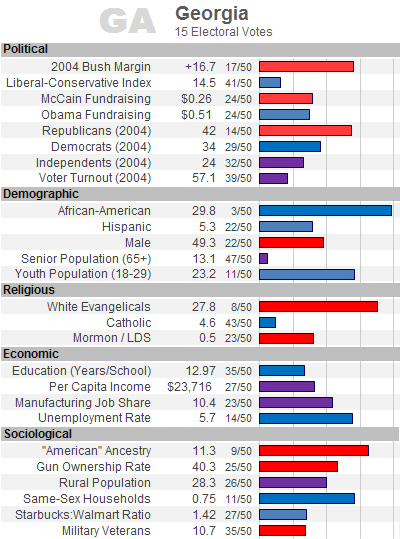 Georgia is home to a large white evangelical base that identifies with “American” ancestry at a high clip, given that much of northern Georgia is in Appalachian territory. Not many Catholics live in Georgia, a demographic that shades Democratic, and self-identifying Republicans still outnumber Democrats. Bush won here by double digits twice, and bigger the second time. Moreover, Barack Obama had a sizeable ground operation here earlier in the general election, left a skeleton staff and a large volunteer base, and only now is getting back to the state with any kind of spending. As a southern state, the cultural tilt still works in McCain’s favor; Democrats are still seen as the party that tried to let black people vote in the 60s, and that ruffled a lot of feathers. However, unlike neighboring Alabama and South Carolina, Georgia has more of an urban base and many young voters, so attitudes have shifted a bit quicker here than in other parts of the South, and Georgia is generally going to be the first state in the five-state Louisiana-South Carolina arc to go blue. McCain should have enough Republican votes to barely hang on, but look for Georgia to be tighter than the polls predict.

Only two states have more black voters than Georgia, and it appears a gigantic wave of individuals in the Obama-supporting demographic is brazenly attempting to exercise its Constitutional rights. Georgia has many young voters, more Starbucks than Walmarts, not many military vets by comparison, and a surprisingly high number of same-sex households. All of these factors help Obama, as does the lower number of senior voters (only three states have fewer). Obama likely has the benefit of a contended Senate race helping upticket, simply because we’ve seen overwhelmingly more energy on the Democratic organizing side this year. We expect to confirm ourselves tomorrow.

It’s entirely possible Georgia will give the Democratic Party its 60th Senate seat on Election Night, if Jim Martin beats Saxby Chambliss. All the House seats are pretty much safe, with incumbent Democrat Jim Marshall in central Georgia facing the toughest re-election in Georgia’s Republican-gerrymandered districts. Republicans are on defense all across the board again this cycle, so if Marshall survived in 2006, he should pull it off again in 2008. If the polls close in the eastern time zone and the nets can’t call Georgia for John McCain because it’s “too close to call,” we’ll all know who the next President-Elect will be.