Tonight we continue our Road to 270 series with the Sunshine State, Florida.

LAND OF BEACHES, oranges, old people and theme parks, Florida was the home in 2000 of the nation’s most dramatic and profound history-altering recount in electoral history. With 5% of the electoral votes in play, it is a true battleground again in 2008. If Obama wins the state and its 27 EVs, electorally that’s all she wrote. If our current projection of Obama by 4.9% holds, then Florida will probably be called early enough to be considered the determinative state on Election Night. If the race closes up, it’ll be another long night in the land of sunshine. 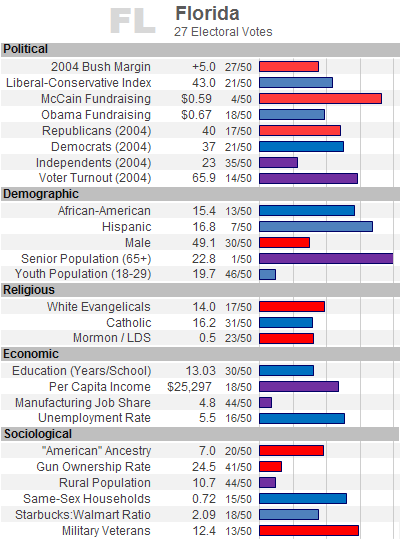 This is the only state that McCain is still contesting for which Barack Obama did not build a primary organizing infrastructure, and McCain fought a contested primary here and won, thanks in no small part to the support offered him by Gov. Charlie Crist (who now wants little to do with McCain). Obama appeals to younger voters by huge margins, and there aren’t many of those in Florida. There are a substantial number of military veterans, and McCain has huge fundraising numbers per capita — his 4th best state. Florida has slightly better than the median for white evangelicals and slightly behind the median for Catholic voters, which adds up to a slight favoring of McCain. Though the population is highly Hispanic, many of these voters are Cubans, and Cubans have tended to be much more Republican than the Hispanic mean partisan lean. Florida tilts slightly conservative on the Likert scale and had more self-identifying Republicans than Democrats.

Barack Obama has several factors that sit to the more helpful side of the median for him and several that sit to the less helpful side for John McCain. In our sociological data, Florida is more permissive with same-sex households and has a respectable Starbucks:Walmart ratio. Also, low gun ownership doesn’t help the Republican Party. It’s a decently high African-American population state, and above the median in terms of female voters. Florida also ranks in the top third of states for unemployment rate, a factor that favors the Democratic candidate.

Although Obama did not have a contested primary to give him the organizing head start he’s enjoyed in every other battleground state, he’s made up for it by running one of the most aggressive general election campaigns in terms of offices and advertising, and forced McCain to spend money in an expensive market to compete. Florida has exemplified the repeat of Obama’s “bankrupt-Hillary” spending strategy against McCain. Top staffers Steve Hildebrand and Paul Tewes have been dispatched to Florida, reflecting exactly how seriously Obama takes the state.

How will elderly voters break in Florida this year? Moreover, Jewish voters are not captured in our demographic table, but there has been a big battle for these voters, with both sides actively courting this base vote to the point that Saturday Night Live’s recent Palin-Biden debate sketch made reference to that message targeting. Joe Biden plays very well with elderly voters, particularly elderly women, and Florida was one place Sarah Palin hurt the Republican ticket even before her negatives began skyrocketing.

Florida is always dramatic, and early voting will help Obama begin to bank votes. Neither Al Gore nor John Kerry had anywhere near the ground operation that Obama has at his disposal, so you can count on Democratic turnout to be maximized here. McCain also has a large field operation in Florida, and we’ll see when we get there in roughly 12 days how the campaigns line up on the ground.