Today we continue our Road to 270 series with the First State, Delaware.

LITERALLY, Delaware, ladies and gentlemen, is a state whose three electoral votes are going to Barack Obama. Delaware has gone Democratic by between 8 and 15 points the last four years, so when it goes blue again this time, well, that’s not change, that’s more of the same! 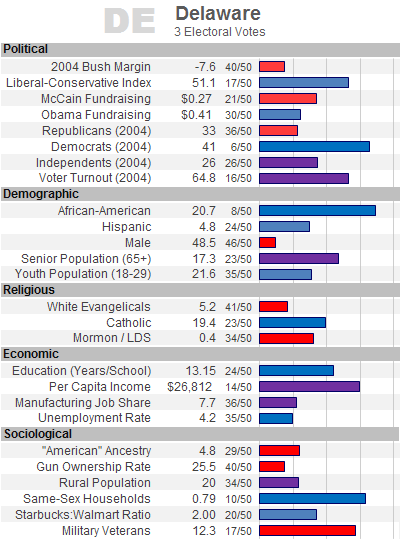 Literally, not figuratively, literally John McCain’s demographic bright spots in Delaware are small elements, such as the the percentage of military vets resting in the top third, the percentage of voters under 30 not being especially high, and his fundraising in the state being marginally higher than the median. I mean, John’s a friend of mine, God love him. But folks, let’s get real. Seriously, to say that John McCain is going to win Delaware when his tax policies are the same as George Bush’s, when his foreign policy is the same as George Bush’s, when his approach to judges is the same as George Bush’s, well, folks, I gotta tell ya, that is literally not going to get the job done in this state.

Delaware has nearly everything shading in Barack Obama’s direction, but Delaware sports very few extremes. The percentage of female voters (5th highest) and the percentage of self-identifying Democrats (6th highest) are literally the closest categories to one end of the spectrum or the other. Delaware has a huge percentage of black voters for a non-southern state, at over 20%, and 8th on the list. Tenth in same-sex households and eleventh in least gun-owning states, Delaware has literally two Starbucks for every Walmart. That’s not change!

Joe Biden is literally running for both Vice President and Senator, and folks, as my old schoolteacher Sister Mary Catherine McMurphy used to say, he’s going to win both races. Mike Castle, the incumbent Republican lone House member, is safe for re-election, and Tom Carper is up for Senate again in 2012. Rumor has it that Joe’s son Beau, who literally introduced his dad at the Pepsi Center in Denver for the elder Biden’s nomination acceptance speech, is a strong candidate to replace his father in the Senate. Democratic Governor Ruth Ann Minner would appoint someone to the seat for two years until a special election in 2010. Beau Biden, Delaware’s attorney general, is literally in Iraq. Literally — not figuratively — we’ve run this joke into the ground.