Today we continue our Road to 270 series with the Nutmeg State, Connecticut.

HOME OF JOE LIEBERMAN, Connecticut is the wealthiest state in the nation on a per capita basis. Christopher Shays is the lone Republican House member in New England’s delegation, and Democrats are targeting this seat in a year that isn’t seeing a close Presidential race or any statewide races. In another wave year, with Barack Obama on the ballot, this is a race to watch. The state’s seven electoral votes are safe for Barack Obama. 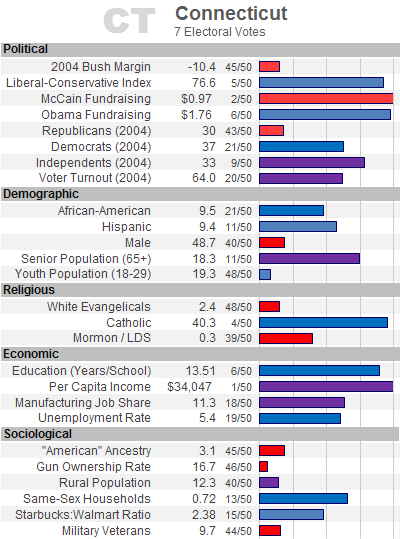 As with several other blue states, John McCain’s solace comes from statistics that don’t happen to favor Barack Obama as forcefully as they do in other states. Youth population, for example, is 3d lowest by percentage in the nation. And McCain’s fundraising is 2d highest per capita of anywhere. There are relatively more elderly voters in Connecticut, and about a third of the voters in this blue state are independents. That’s about where it stops for John McCain.

Obama’s statistical edges are numerous. Low gun ownership, low “American” ancestry, relatively higher same-sex household percentage and Starbucks:Walmart (even in this Dunkin’ Donuts state) and not many military veterans. On the religious front, very few white evangelicals, very many Catholics, and not a lot of Mormons. Only five states went for Kerry by bigger margins, it’s the 5th most liberal state on the Likert scale. Obama has very strong fundraising here, and the state is well-educated. Except for the age factor, nearly every demographic edge Obama could want in his favor, he has in Connecticut.

The post-election expulsion of Joe Lieberman from the Democratic Party caucus, and whether Harry Reid has the balls to do it.