Today we continue our Road to 270 series with the Centennial State, Colorado. 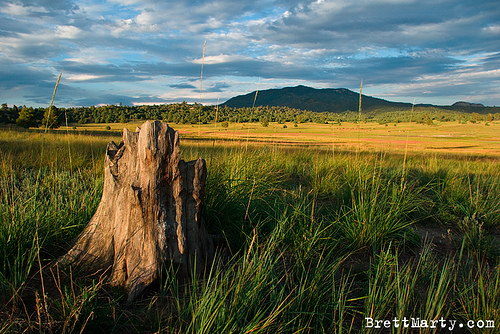 DO NOT PASS GO, DO NOT COLLECT $200, Colorado is going blue. What was supposed to be a nailbiter simply hasn’t materialized into a very tough fight from the McCain campaign, and the Obama ground game in Colorado is an elite, overwhelming force. When all is said and done, stunningly beautiful Colorado will have two Democratic Senators, a Democratic governor, four or five out of seven House seats held by Dems, and will have given its nine electoral votes to the lanky Senator from Illinois. Chuck Todd made an outstanding point about Colorado and the Republican party’s woes:

If I were the Republican Party, I’d make Michigan and Colorado my petri dishes for experiments to get the party’s groove back. Until the GOP can appeal to secular independents in the West and working class Democrats in the Midwest, they are going to be a minority party. The party’s comeback should start in one of these two states because they are microcosms of the GOP’s issues. 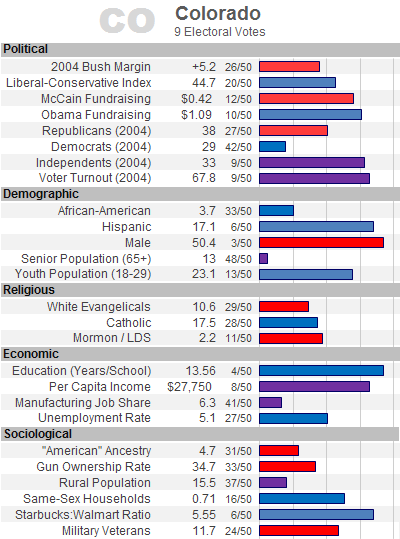 John McCain is helped by men and Mormons in Colorado, as well as the social/religious conservative base who love and are energized by Sarah Palin even if ambivalent about him. Republicans have long outnumbered Democrats in this part of the world, with most of the independent, libertarian, and/or former Perot voters typically leaning Republican over the Democratic candidate when given only two viable choices. Indeed, only LBJ in 1964 and Clinton (due to the Perot-voting split of the conservative vote) in 1992 have taken Colorado for Democrats since Truman. It’s a state whose independents would have bought McCain’s maverick argument in 2000, and indeed McCain’s fundraising is in the top 25% of states. McCain has made trips to the Western Slope, where he needs to rack up a big margin in Grand Junction (Mesa County) if he is to have any hope of holding down the losses in Denver.

Demographically, factors that favor the Democrat include many young voters and, in this race, very few elderly voters favors Obama. Starbucks overwhelm Walmarts, and despite hosting the epicenter of religious Republican conservative politics in Colorado Springs, only 15 states have a higher percentage of same-sex households. Colorado is also a highly educated state, and despite being a Mountain West state, has a lower than the median gun ownership rate. Colorado has an increasing number of Latino voters, and only nine states donated money to Barack Obama at a higher per capita rate. Finally, Barack Obama appears to have gotten a huge benefit from the Democratic National Convention taking place in Denver, as thousands of new volunteers around the state traded volunteer hours for tickets.

Marilyn Musgrave, the Republican House incumbent representing the eastern third of the state, is in a very tough re-election fight against Democrat Betsy Markey. Few House members this side of Michele Bachmann would Democrats like to see go down more, given her public antipathy for Americans who are gay. In the presidential race, if Obama reaches 40% in a place like Mesa County (Grand Junction) or in El Paso County (Colorado Springs), then goodnight sweet prince. To have any prayer, McCain needs to hold Obama way down at the low 30% area (Gore and Kerry levels) in those places and hope that voting problems in Denver hold up the vote there. John Elway stumped for John McCain, but even his late-minute heroics likely won’t be enough. 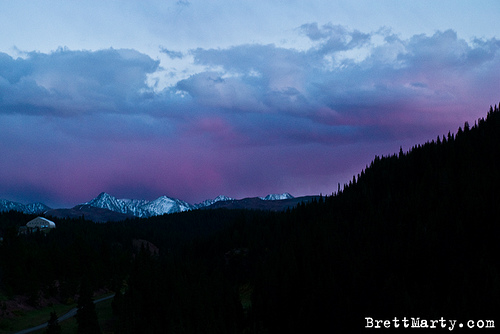