Today we continue our Road to 270 series with the Golden State, California.

COASTALLY URBAN AND MAVERICKILY LIBERAL, California is one of only four majority-minority states (TX, HI, NM) in the nation. It’s a guaranteed 55 electoral votes for Barack Obama, as it has been for every Democrat since 1992. It has the smallest percentage of rural voters in America. Ironically, it’s a state both candidates have visited far out of proportion to the closeness of the race, because both sides need wealthy donors who populate the state. Over ten percent of the Five hundred Thirty Eight electoral votes in play in a presidential election are represented by California. 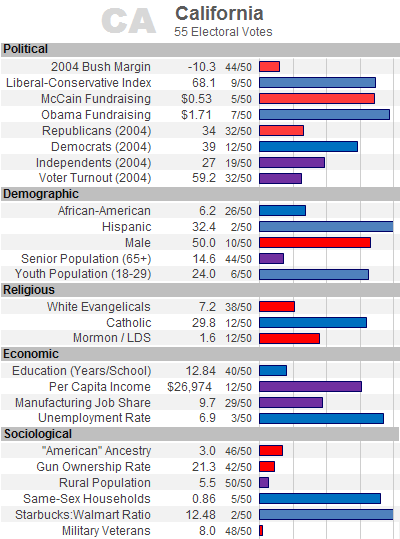 No doubt about it, California’s 55 EVs are going to hurt. California alone is 20% of the total needed to win the presidency. John McCain does have a few factors that shade in his direction. Despite being home to numerous universities, California is on the low end of the education level scale. It also has a relatively high ratio of male voters, and McCain’s fundraising here is strong. Relatively apathetic voter turnout counts for some dampening of the youth turnout, but that’s about the extent of the good demographic and political data that favors the Republican.

With a Starbucks:Walmart ratio that high (2d biggest ratio), Barack Obama is on safe ground. In addition, sociological factors favor the Democrat, given that the state has the fifth highest same-sex household percentage to go along with low gun ownership rates and low reporting of “American ancestry.” Unlike Alaska with the highest, California has the 3d lowest military veteran percentage. Though African-American population puts it in the median, California’s Hispanic population is 2d highest nationwide, and it’s got the 6th highest percentage of voters 18-29 along with the 7th lowest percentage of voters over 65.

Though Hillary Clinton’s campaign argued that because Barack Obama didn’t win this “big state” in the primary, he wouldn’t be able to win it in the general election, there’s really nothing to hold your breath about at the presidential level. The highly accurate Field Poll put Obama up 16 points in mid-September, and that was before the recent financial crisis that caused his numbers to spike upward nationwide. California’s gubernatorial race isn’t until 2010, and neither Senate seat is up for grabs this year, so to the extent it exists all the drama is in the House. Democrats are putting the most resources into flipping California’s 4th CD — a large district stretching across the northeast sector of the state — where the incumbent Republican John Doolittle is retiring under the weight of his corruption and federal investigations. For that open seat, Democrat Charlie Brown is running against Republican Tom McClintock, who lives hundreds of miles away in Thousand Oaks, CA.