This afternoon our Road to 270 series continues with the Natural State, Arkansas.

HOME OF WAL-MART, Arkansas ranks predictably lowest on our vaunted Starbucks:Walmart ratio. This state likes its schmoozy, charismatic governors from Hope, having elected and re-elected both Bill Clinton and Mike Huckabee for over 22 of the last 30 years. It likes its politics socially conservative (Democrat Mark Pryor, running unopposed for his first Senate defense, is a creationist) but economically populist (see: Huckabee). In terms of the presidential race, this is not a state where Barack Obama was competitive in the primary against Hillary Clinton, and also looks like an easy win for John McCain in the fall. 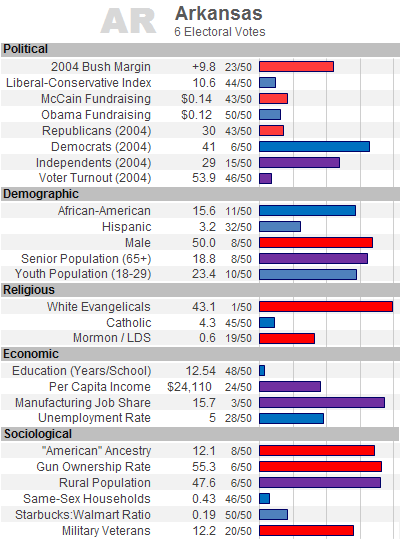 The highest percentage of white evangelicals in the country is the biggest reason McCain will win this state. One of the most conservative states on the Likert index, Arkansas also has the 3d-worst education rates. High gun ownership, high “American” ancestry reporting, 5th-fewest same-sex household rate are all sociological factors weighing in the Republican’s favor. This is another state where McCain outraises Obama, though it’s not because his fundraising is anything special (8th-lowest per capita), it’s because Obama’s is dead last.

McCain’s pick of Sarah Palin will play extremely well with the evangelical base here. Already, there is indication that McCain’s biggest convention bounce is in the South, in large part due to Palin’s selection. McCain also benefits from a relatively male and relatively older voting population.

Barack Obama hasn’t been to Arkansas since 2006, and it’s unlikely he’ll be there before November 4. There are a relatively high percentage of black voters as well as under-30 voters. In theory, Obama should be able to be competitive in Arkansas, as Democrats outnumber Republicans by a significant margin, both Senators are Democrats, the governor is now a Democrat and three out of four House members are Democrats. Moreover, the state’s Democrats have very little else to do with so many races unopposed. But the state’s distaste for Obama personally is reflected in his fundraising numbers. Obama is to Democrats in Arkansas and West Virginia what Hillary Clinton is to Democrats in the Mountain West.

The biggest thing to watch for is the role Arkansas plays in the post-election analysis. If Obama loses, Hillary Clinton supporters will point to Arkansas as Example #1 of six electoral votes that, they claim, would have swung the other way had she been the nominee. This argument would gain credibility if both (1) Obama fails to win any of the Mountain West states like Nevada and Colorado and Montana – states Clinton would have not even bothered to compete in; and (2) the overall defeat is a narrow one. It’s easy to forget that Hillary Clinton was minimally targeted once it was clear in mid-February Obama would be the nominee, and indeed even today the McCain campaign is reduced to avoiding both Hillary Clinton (for voter-wooing purposes) and Teddy Kennedy (for illness/backlash purposes) as puppet arguments to vote against Obama. (Instead the bogeyman is Patrick Leahy? He was in Dark Knight! Is Dick “Go F%^* Yourself” Cheney behind that one?)

As for what to watch before the elections, not much. It wouldn’t be a big surprise to see Arkansas – for lack of almost any competitive races anywhere on the ballot – have the lowest voting turnout on the mainland, if not in all 50 states.