Tonight we continue our Road to 270 series with the Grand Canyon State, Arizona.

JOHN MCCAIN’S HOME, Arizona will give its ten electoral votes to its native son. One of the poorest per capita states in the nation, this stunningly beautiful state was also Barry Goldwater’s home, and indeed John McCain took Goldwater’s seat in 1986. Only once since Harry Truman left office, Bill Clinton’s 2-point win in 1996, has the state supported a Democrat for President, and the trend will continue this year. 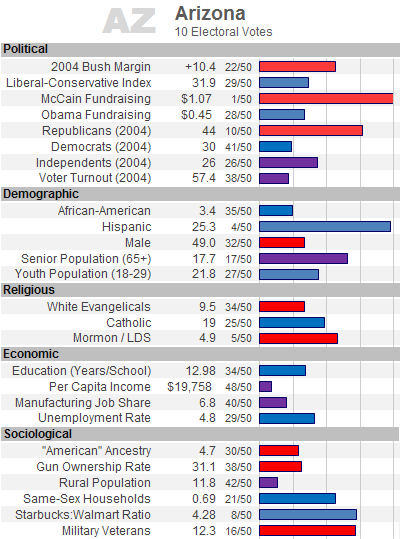 John McCain outraised Barack Obama in his home state by better than two-to-one, and McCain’s home state is his best. Arizona ranks tenth on highest Republican partisan self-ID, as well as tenth on lowest Democratic partisan self-ID. There are 21 states raked more conservative on the Likert scale, and a large number of Mormons and reasonably high percentage of veterans tilt the scales in the Republican’s favor. While Al Gore famously lost his 11-EV home state of Tennessee in 2000 and it cost him the White House, John McCain will not suffer the same fate in 2008.

Barack Obama has a high Starbucks:Walmart ratio and a very large number of Hispanic voters and Native voters. Also, Arizona posts a surprisingly low gun ownership rate for a Mountain West state. The rest of the factors normally thought to weigh in a Democratic candidate’s favor seem to rank at or near the 50-state median at best. Catholics, voters under 30, Obama fundraising numbers are all quite average, and that doesn’t get the job done when McCain’s statistical edges are significantly more pronounced where he has them.

Arizona has several House races in contention this year, with freshman Democratic seat defenses looking good in AZ-05 (Harry Mitchell) and AZ-08 (Gabrielle Giffords). Rick Renzi’s open District AZ-01 seat appears to be a likely Democratic pickup, and incumbent, conservative Republican icon John Shadegg in AZ-03 (north Phoenix suburbs) faces a challenge from Democrat Bob Lord. The Lord-Shadegg race is a classic strong incumbent facing a well-funded opponent in a wave year, so this is the #1 race to watch. Will John McCain bring enough coattails in his home state that he can at least protect Shadegg?