Today we continue our Road to 270 series with the Last Frontier State, Alaska.

BASTION OF HOCKEY MOMMERY, Alaska was nearly a triple drama this cycle for the first time in many, many years, if ever. Before the Sarah Palin pick, Barack Obama was threatening in Alaska, and might well have closed from the 5-7 point deficit at this time of national sharp movement in his direction. With Palin on the ticket, Alaska is seemingly locked into the McCain column. Though we are very skeptical that VPs “bring” states that the candidate would not otherwise have won as a general rule, in smaller states that get typically get little to no national presidential-level attention the addition of a popular candidate to a ticket can move numbers.

Now what remains in Alaska is one of the most dramatic Senate races this cycle, with Anchorage mayor Mark Begich challenging the indicted Ted “Tubes” Stevens. In Alaska’s lone House race, longtime incumbent Don Young, who is under federal investigation for bribery, faces former Alaska House Minority Leader Ethan Berkowitz in a race Dems are expected to pick up. It’s a messy enough situation that Sarah Palin refuses to say whether she endorses either Stevens or Young. 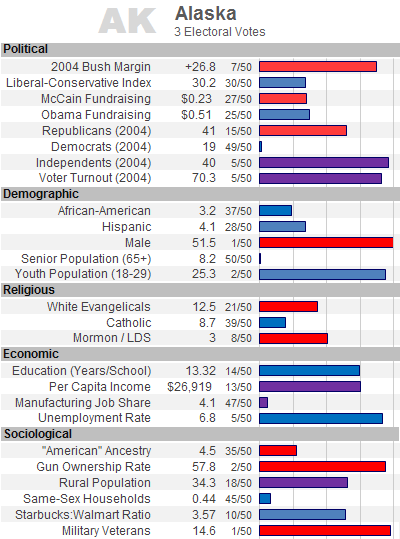 Sarah Palin. With that selection, John McCain locked up the state for the Republican ticket, as polls moved from mid-single digits to medium double digits in a blink when the selection was announced. The fact that Alaska has been a Republican bastion since its inception into the Union – save for LBJ’s landslide in 1964 – is also a great starting point. George Bush won here by his 7th largest margin and gun ownership is the 2d highest in the nation. It’s also the number one percentage state for military veterans, and was the 2d lowest Democratic state by self-reporting in 2004.

The fact that Alaska hasn’t been friendly Democratic territory historically didn’t deter Barack Obama from making an attempt in the early going to make a play for this state. Alaska has the smallest percentage of voters 65+ and the 2d largest percentage of youth voters 18-29. Not to mention, Alaska ranks 10th on the Starbucks:Walmart ratio. It’s a fairly well-educated state, and Obama’s fundraising beats McCain’s here by more than 2-1. Unemployment in Alaska is relatively high, and the number of independents here is relatively high. Although Obama has now abandoned the paid organizer effort in Alaska (we met some of them in Nevada), he was the only candidate to even mount a ground campaign, and the DSCC and DCCC have put resources into what would be historic pickups. It’s a case where the lower ticket ground game will continue to help Obama overperform past Democratic candidates, even if he doesn’t win.

Democrats have not won a House seat in Alaska since the 1972 plane crash death of Nick Begich, Mark’s father. Mike Gravel, who left office in January 1981, is the last Democrat to serve at the federal level for Alaska’s constituents. This year, Democrats are favored to win both seats.

The other thing to watch in Alaska is the respective legal events occurring for each of these candidates. As they did with Social Security and the US Attorneys scandal, among others, Talking Points Memo has completely owned the story of Alaska Republican Party political corruption, and regular readers of TPM were fully versed in the Alaskan mess long before the announcement of Sarah Palin as VP. If a legal maneuver occurs in any one of those cases (Stevens’ indictment, Young’s investigation, Palin’s Troopergate scandal), you’ll find it on TPM.